US has no plan to step into Greece-Turkey dispute, says sort it out on your own

Erdogan declared that if Greece does not concern itself with Turkey it has nothing to fear from Ankara, meaning that Athens should disregard its sovereign rights and ignore the illegal Libya-Turkey accord delimiting their putative EEZs. 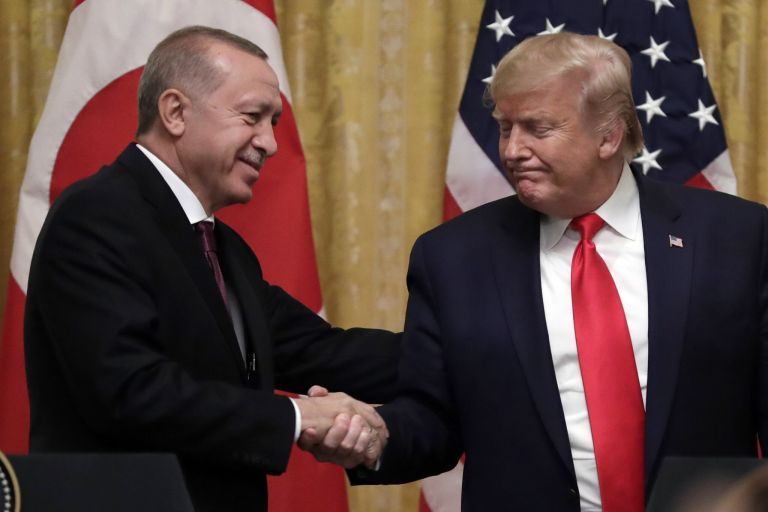 Even as US President Donald Trump had a telephone communication with Turkish President Recep Tayyip Erdogan, Washington appears to have adopted a Janus-faced stance in dealing with the Greek-Turkish dispute in the Eastern Mediterranean as it has refused to take a stand on the legality or illegality of Turkey’s massive encroachment on Greece’s EEZ especially around Crete.

Trump reportedly told Erdogan to sort out his difference with Greece in the Mediterranean and the two leaders also discussed the situation in Libya, where a Tripoli-Ankara MOU on EEZs expropriates a large swathe of what is Greece’s EEZ under international law.

In a tweet on the 27 conversation Trump’s spokesman John Deere said,”  President Trump also highlighted the importance of Turkey and Greece resolving their disagreements in the eastern Mediterranean.”

Just one week after Secretary of State Mike Pompeo in a letter to PM Kyriakos Mitsotakis said that the US will remain committed in supporting Greece’s defence, the State Department spokesman on 28 January reiterated the part of Pompeo’s letter that said Greece and Turkey must sort out their differences on their own, peacefully and in accord with international law.

Pompeo spoke twice to his Turkish counterpart Mevlut Cavusoglu but the content of the conversation was not disclosed.

The State Department spokesman called for self-restraint and invoked international law in calling for a peaceful resolution of any dispute when asked if the two countries should go to the International Court of Justice in The Hague to resolve maritime disputes.

Greece however has steadfastly insisted for decades that the only bilateral dispute involves delimitation of the two countries’ continental shelf.

Turkey, however, challenges Greek sovereignty over Aegean islets and now again vocally insists that larger Greek Aegean islands should be demilitarised in line with the Lausanne Treaty, ignoring the clear and present danger from Ankara and the right self-defence under the UN Charter.

Turkey firmly rejects international law on maritime issues and is not a signatory to the 1982 UN Law of the Sea Convention.

Meanwhile, Erdogan declared that if Greece does not concern itself with Turkey it has nothing to fear from Ankara, meaning that Athens should disregard its sovereign rights and ignore the illegal Libya-Turkey accord delimiting their putative EEZs, which in fact are not contiguous.

Erdogan declared that Greece has no connection with Libya and should not involve itself in its affairs, where Ankara has sent thousands of troops from Syria in a bid to make the country a Turkish outpost.