In contrast with the State Department Trump avoided any criticism of Turkey for its intervention in Libya or on the Libya-Turkey EEZ accord that expropriates large swathes of Greece’s EEZ. 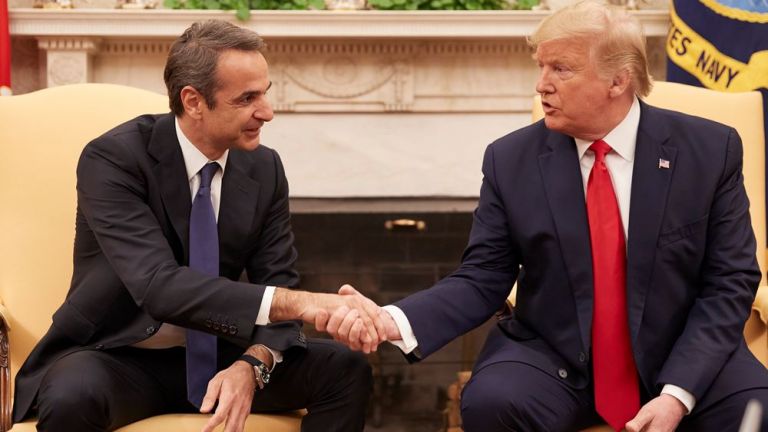 Energy, military procurement, military facilities in Greece, and crucial regional developments were among the top issues at the 7 January one-hour meeting between Donald Trump and PM Kyriakos Mitsotakis at the White House.

For Greece a presidential statement regarding Turkish violations of international law in the Southeast Mediterranean and the Aegean would have been welcome but there was no joint press conference after the talks. Many observers believed that was because Trump wanted to avoid questions on the assassination of Qassem Soleimani and the crisis with Iran.

The main opposition in Greece, SYRIZA, depicted the meeting as a failure of Greek diplomacy. Indeed it said with no small dose of hyperbole that the meeting was an “unprecedented fiasco”.

In contrast with the State Department Trump avoided any criticism of Turkey for its intervention in Libya or on the Libya-Turkey EEZ accord that expropriates large swathes of Greece’s EEZ.

Yet Trump extolled Greece’s economic recovery during brief remarks by both leaders before the talks.

“In terms of percentage growth, we are talking about one of the biggest rebounds in the world. It’s a huge recovery and you have done very well,» Trump observed.

That progress was largely made on the former administration’s watch.

In that regard Mitsotakis solicited the support of Trump in drawing US investors to Greece. He underlined that many pro-business measures have been passed during his first six months in power, including business tax cuts.

«We look forward to your positive support, we want US businesses to invest in Greece so that we can expand the economy at a rate so striking that people will really feel the difference,» the PM said, referring to the most crucial issue for Greece which is economic reconstruction.

For his part Mitsotakis used his time on camera to state what he would have at a news conference – that the Libya-Turkey agreement on the EEZ and defence cooperation destabilise the region.

He also noted that Athens expects the US’s support on the matter and that Greece is an ally the US can rely on.

At a presentation at the Atlantic Council in Washington Mitsotakis stressed that Greece will never cede an inch of territory or tolerate other violations of sovereign rights.

Equally importantly, he declared that Greece is prepared to negotiate. with Turkey under the strict condition that such talks are based on the strictures of international law under.

He stressed that Greece will never negotiate with Turkey under pressure He was referring to  threats of the kind that Ankara has heightened in the Aegean and Southeast Mediterranean over many months.

To a large extent the details of policy issues that are crucial for Greece will be threshed out at the PM’s 8 January meetings with Vice-President Mike Pence, Secretary of State Mike Pompeo, and US Senate leaders.

The leaders agreed that US-Greece relations are better than ever, and that is in large measure due to the expansion of US access to military facilities in Greece.

Meanwhile, reports indicated that US Chinook and other helicopters en route to the Middle East refueled at an air base in Greece.

A necessary ingredient in all meetings between a US president and Greek PM is military procurement. Trump himself at a joint news conference with the former PM announced Greece’s upgrade of its F-16 fleet to Vipers and placed a three billion dollar price tag on the deal.

The cost has since been substantially pared back, but now Athens is eyeing the F-35 super fighter jet if the US can offer a deal that the fragile Greek economy can shoulder.

It may be noted that Ankara was to acquire and construct parts of the F-35s in a co-production deal that the US suspended due to Turkey’s determination to buy Russian S-400 missiles.

We are interested in participating in this programme and in other programmes,” Mitsotakis said about the F-35 Fighters.