As an international affairs expert has said, ‘In our day and age you don’t have to declare war against a country. Carefully directed refugee flows suffice to wreak havoc.’ 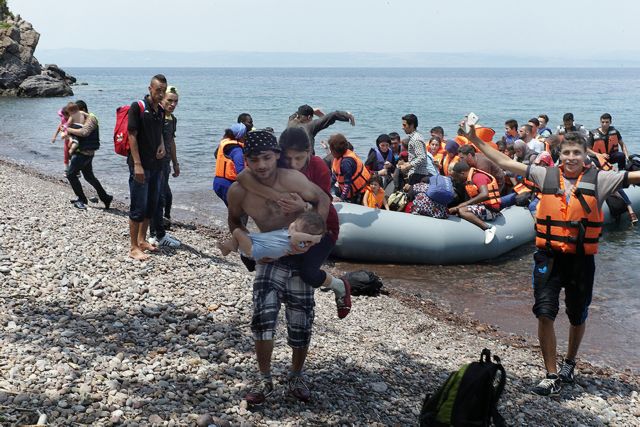 Even as PM Kyriakos Mitsotakis was holding talks in Berlin with Chancellor Angela Merkel on a wide wage of national and European issues including migration 500 refugees and migrants on 15 boats left the Turkish coast and landed on the village of Sikamia on the island of Lesvos.

Such a massive flow had not been seen in a long time.

Observers of the migration issue said that they had not seen such a flow since 2015 when the migration crisis burgeoned enormously, threatened European cohesion, tested European tolerance, and allowed extreme nationalist and ultra-right forces to grow stronger and to develop phobic, anti-EU arguments.

Greek authorities have become concerned about possible “directed” migrant flows designed by Ankara to serve geopolitical and other aims linked to Turkey’s provocative stance and its illegal gas and oil drilling in Cyprus’ Exclusive Economic Zone (EEZ) and in the broader region of the Southeastern Mediterranean.

That is not the only thing.

Recently there have been sporadic incidents of migrants on boats leaving the Turkish coasts for the Greek islands, and before that there was a similar migration problem on Cyprus.

Over the last months Cyprus received a large number of refugees and migrants of undetermined origin.

Ever since the Cyprus-Turkey crisis emerged migration flows from Turkey, Syria, and Lebanon mushroomed dangerously, with 15,000 refugees from Afghanistan and Pakistan creating suffocating conditions on the island and they all went to free Cyprus as it is an EU member-state and not to the Turkish-occupied north.

Cypriot authorities found themselves in an exceptionally difficult position and hastened to seek emergency EU aid.

Some believe that the new migration flows are linked with broader geopolitical clashes between greater powers in the region – including Russia and Iran.

If confirmed that further complicates matters and makes it an enormous problen that goes far beyond Greece and Cyprus.

In that sense, Mr. Mitsotakis quite properly stressed the issue during his news conference with the German Chancellor in Berlin and called all but especially northern European leaders to account.

Foreign Minister Nikos Dendias also quite properly submitted a demarche to the Turkish ambassador in Athens.

As an international affairs expert has said, “In our day and age you don’t have to declare war against a country. Carefully directed refugee flows suffice to wreak havoc.”

By all appearances, we are confronted by such an undeclared war with many repercussions.

That requires vigilance, national mobilisation, the forging of alliances, and seeking practical assistance and solidarity from the EU.

Our partners are obliged to secure Greece’s borders which are at once the EU’s and to create a system for the just distribution of refugees.

That is the least they can do and it is non-negotiable this time.