Editorial: The power of the self-evident

The education minister’s initiatives and the decisions of the Central Archaeological Council demonstrate that the country is abandoning a cycle of counter-productive ideological fixations and that a spirit of reason is prevailing. 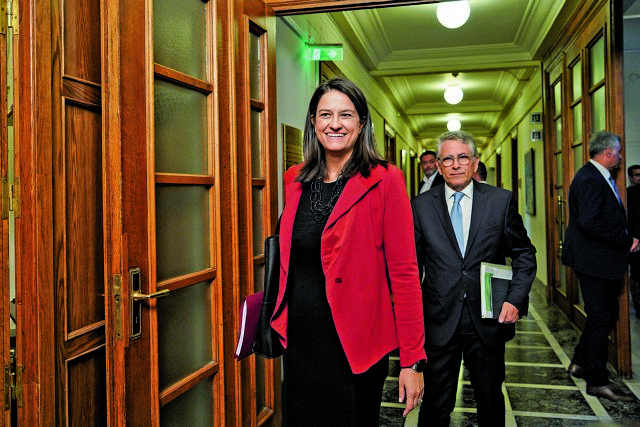 Over the last few days the Central Archaeological Council and the Central Council of Modern Monuments convened separately to discuss the problems and obligations arising from the huge but long stagnant development project at the old airport at Elliniko.

Both Councils adopted a ruling by the Council of State, Greece’s Supreme Administrative Court, and limited their demands, thus transcending the maximalist administrative demands of the previous period, which raised insurmountable obstacles to the completion of this major investment.

This was obviously the result of the intensely expressed political will of the new government and of the restoration of a spirit of rationalism in the two competent administrative organs.

A simple shift in mentality was enough to remove the obstacles and to transcend dysfunctions and ideological fixations.

Now everyone can understand that the Elliniko investment, liberated from bureaucratic red tape and shackles, can move forward and offer the expected growth impetus to Attica and the entire country.

One must wonder why so many years of sterile disputes were needed to finally make largely self-evident choices and decisions.

At the same time, the Education Minister Niki Kerameus (photo) announced in an interview with a US television channel measures that will bolster the extroversion of Greek universities.

She said the government wants to make Greece the educational hub of Southeastern Europe.

Asked how this will be accomplished she said that in the first phase she will allow universities without bureaucratic approval to organise undergraduate courses conducted in foreign languages so as to build a foundation that can attract foreign students.

The ministry also intends to establish summer courses of study that will be taught in foreign languages and to expand cooperation with universities internationally.

All this can be done with the current infrastructure and budget the minister maintained, as long as rectors are granted autonomy and flexibility.

Such moves are self-evident and should have been made years ago as international academic practice mandates, especially as there has been an interest in Greek studies from Europe, America, North Africa, and Asia.

It is truly odd that all these years the state did not seek the internationalisation of Greek universities when Cyprus led the way – even though it did not have a tradition in university education – and within 15 years attracted tens of thousands of university students from the wider Southeastern Mediterranean region.

The minister’s initiatives and the decisions of the Central Archaeological Council demonstrate that the country is abandoning a cycle of counter-productive ideological fixations and that a spirit of reason is prevailing.

That spirit must continue, expand, and imbue all public affairs.

Everyone will benefit if the country is freed from the shackles of backwardness.