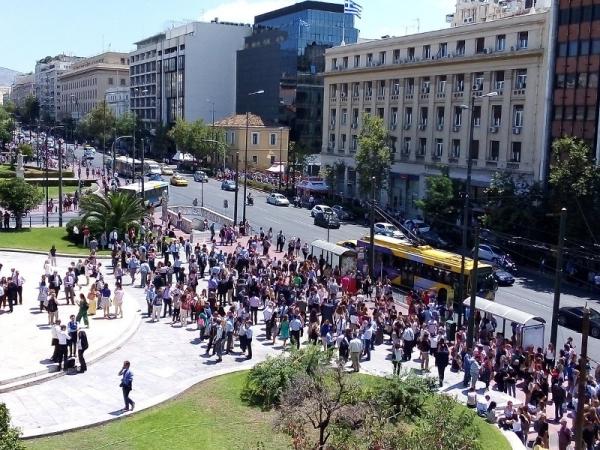 According to the seismological centre of the University of Thessaloniki the depth of the temblor was 2 kilometres which explains why it strongly shook Athens.

A strong earthquake measuring 5.1 on the Richter scale, according to initial reports, at approximately 2:13pm shook the Greek capital for approximately 15 seconds.

The first reports from seismologists indicated that that the epicentre was four kilometres from Magoula, 23 kilometres northwest of Athens.

According to the seismological centre of the University of Thessaloniki the depth of the temblor was 2 kilometres which explains why it strongly shook Athens.

Dynamic Tectonics – Applied Geology Professor Efthimios Lekkas said that it is not clear yet whether the 5.1 Richter temblor was the main earthquake and that it was felt strongly throughout Attica but also in central Greece.

There were subsequent earthquakes between 2 and 3.2 on the Richter scale.

Shortly after the quake telephone communications were interrupted for some time but now appear to be functioning normally despite the heavy traffic on phone networks with citizens hastening to contact relatives and friends.

Residents and workers all over Athens abandoned homes and offices in panic awaiting the first reports and news of subsequent, smaller quakes.

In some places there were power outages and calls to the Fire Service to retrieve people from stalled elevators.

There were disturbances in the suburb of Glyfada and in the Athens neighbourhoods of Koukaki, Metaxourgeio, Omonia, and Syntagma.