Government to table programme in Parliament, Regling lays down the law

‘To support growth and debt sustainability, the commitment to stick to the agreed reform path beyond the end of the programme is essential.’ the ESM declared. 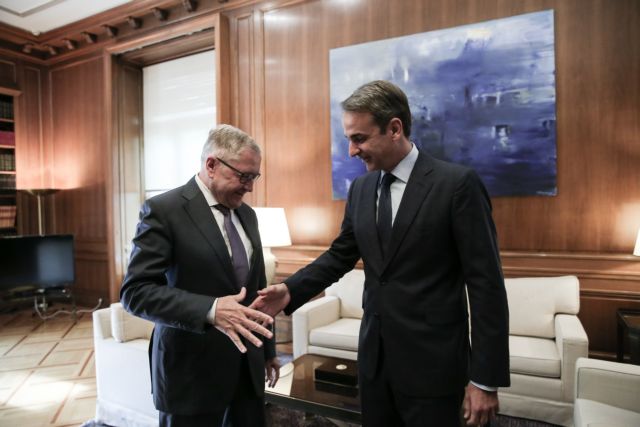 Just four days before Prime Minister Kyriakos Mitsotakis will present his government’s programme in Parliament on 20 July in order to receive the constitutionally mandated vote of confidence in Parliament, he met in Athens with European Stability Mechanism (ESM) chief Klaus Regling, who will play the decisive role in determining how and when the incoming government’s promise of lowering both taxes and the primary surplus targets in order to achieve growth can be implemented.

After the meeting, Mitsotakis made it perfectly clear in a public statement that his governmeny fully intends to meet fiscal targets agreed to with creditors.

The readout from the PM’s office stated that, “The Prime Minister underlined the importance of reforms that will bolster economic growth and job creation, and which are the central pledges of the newly-elected Greek government.”

Meeting primary surplus target above all
The main target for the time being is a 3.5 percent of GDP annual primary surplus, which Mitsotakis pledged that his government will try to lower by rapidly achieving higher growth rates, effectively ensuring that creditors will get their money back.

As Regling noted, the EFSF and the ESM combined have lent Greece a whopping 205bn euros (of a total of 290bn euros in aid that Greece has received during the crisis).

“On top of that there is extensive debt relief,” he stressed.

For its part, the PM’s office expressed the conviction that “rapid implementation of structural reforms will open the path to stronger growth and greater fiscal space”.

It is that additional fiscal space that the government needs in order to proceed with implementation of its pledged tax cuts.

Unsurprisingly, debt sustainability is the top priority for Greece’s biggest creditor, the ESM, and its chief made that clear in his speech to a session of the Economist Conference in Athens entitled “Greece’s Economy – Fulfilling Expectations after the Election?”

The question can only be taken as rhetorical as the Greek government was voted into office less than two weeks ago.
The title essentially aims to spell out in what manner the creditors of Greece expect it to fulfil its obligations.

“The fiscal surplus is – together with growth – the necessary condition for debt sustainability,” Regling declared, having praised the super-primary surpluses achieved by the previous Tsipras government.

Acknowledging that “promoting growth” is the overarching objective, both for creditors and for Athens, Regling essentially called for a reversal of relief measures which the previous government passed in its last months and weeks in office, some of which New Democracy voted for in Parliament as well.

Regling is categorically opposed, for example, to the increase in the minimum wage legislated by the Tsipras government and supported by ND, obviously because it had no other choice electorally.

“First on structural reforms: reforms already implemented during the adjustment programmes, such as the labour market reform, should not be reversed. For example, increases in the minimum wage should be in line with productivity developments to maintain competitiveness,” Regling told The Economist conference.

Regling did not clarify specifically if he opposes SYRIZA’s re-institution of collective bargaining contracts (right after Greece completed the third and last bailout memorandum), but that cannot be ruled out based on his remarks.
Stress on younger generation

Essentially Regling argued that young Greeks must work harder to support the skyrocketing number of retirees due to Greece’s demographic crisis – Greeks have been bearing fewer and fewer children for decades.

But he also stressed the pressing need for judicial reform and for reducing the enormity of bureaucratic red tape.

“Further structural reforms are necessary to improve productivity and competitiveness. This is particularly important given the poor demographic outlook for Greece. Strengthening productivity requires reforms to make the economic environment more business-friendly, to reduce the time needed to resolve legal disputes, and to further improve the effectiveness of public administration,” Regling declared.

Regling described privatisation and better management of state assets as key to “building an effective corporate governance culture in Greece, and to attracting both foreign and domestic investment”.

Without referring directly to Greek banks’ enormous problem with Non-Performing Loans (NPLs), Regling said that what is needed is “a stable and profitable banking sector to support firms and households”.

Regling reiterated that the primary surplus target is still paramount and that, “A reduction in tax rates, for example, could be coupled with a broader tax base,” an indirect reference to the ESM demand that the legislated decrease in the tax-free threshold be implemented.

Also, available fiscal room should be used for productive expenditures such as public investment Regling declared.

Regling also indirectly criticised the Tsipras government’s benefits for retirees, saying that “social benefits should be targeted at the disadvantaged like the young and working age population, where the risk of poverty is high”.

“To support growth and debt sustainability, the commitment to stick to the agreed reform path beyond the end of the programme is essential,” Regling concluded.