New era for Cosco in Piraeus: Building the social face of a business giant

‘There is a weighty moral obligation of anyone who achieves great things in a land to offer as much as possible to its society,’ said Piraeus City Councilman and Olympiacos FC owner Evangelos Marinakis. 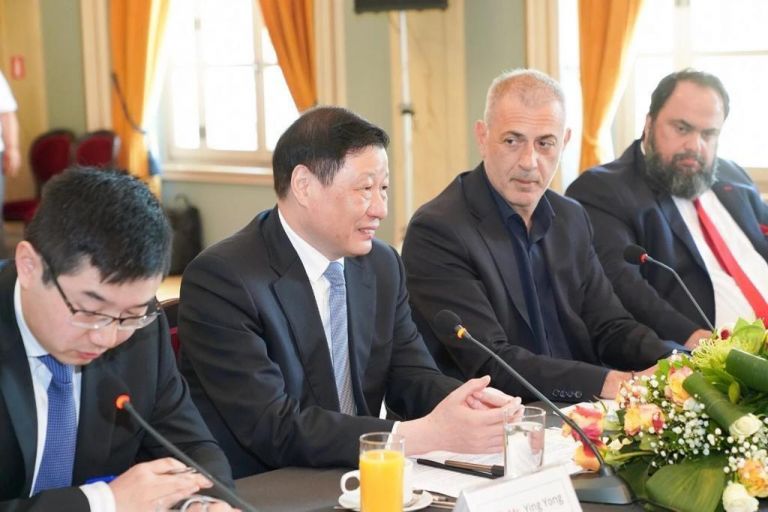 Cosco’s presence has over recent years placed Greece’s premier port city on the investment map, as was confirmed by the meeting that took place at the Municipal Theatre of Piraeus on 21 June.

The overarching conclusion of the meeting was that Piraeus can and must become a magnet for global investment in the years to come.

A large delegation from the Municipality of Shanghai along with China’s Ambassador to Athens, Zhang Qiyue, and the Managing Director of the Cosco Shipping Group Xu Lirong were warmly welcomed by municipal leaders.

The talks highlighted the fact that Piraeus and Shanghai are closely linked through strong economic, business, cultural, athletic, and educational ties.

The close relationship was cemented by Piraeus Mayor Yannis Moralis’ 2018 visit to Shanghai, but Moralis underlined the longstanding ties by presenting a copy of the 1985 Protocol linking Piraeus and Shanghai as Sister Cities.

The objective of the two great cities now is to further develop their cooperation n order to maximise the mutual benefits.

Cosco’s investment in Piraeus has proven extremely fruitful and the talks focused on seeking ways for it to yield even greater social benefits for the city.

The delegations exchanged views and proposals on how to bolster business cooperation and on how the areas of education, athletics, and culture can bring the two cities even closer.

In that context the hosting of the Opera of Shanghai at the marvelous Municipal Theatre of Piraeus building was happily confirmed.

Evangelos Marinakis stressed that the people of Piraeus should have reason to be proud of the contribution of Cosco to the port and the city more broadly.

Marinakis: The Chinese revere culture, tradition, and love their country

In welcoming the high-level, 18-member Chinese delegation Marinakis noted that, “I am so pleased to be with people who so deeply understand and respect the importance of their culture and traditions and who love and are proud of their country. You of course know well that Piraeus is a European gateway of commerce for the entire world. Let us not forget that it was very near here, at Salamis, that an historic naval battle proved decisive in determining the fate of Europe and the Western world.»

“I am certain that Cosco’s investment in the Port of Piraeus will further expand. What is important from now on is establish and expand the social contribution of Cosco to Piraeus and its people. It is a contribution that should be as worthy of this historic city as is the investment of our Chinese friends in our port. It is so important for the citizens of Piraeus to be proud of what Cosco will offer the city,” Marinakis noted.

Evangelos Marinakis stressed that, “There is a weighty moral obligation of anyone who achieves great things in a land to offer as much as possible to its society. That is precisely what I personally and my associates have done for so many years and I shall continue to do so, as we have an obligation to palpably demonstrate our social sensitivity,” Marinakis underlined.

“That is why I believe that it would be well for you to swiftly demonstrate your focus on this commitment. I would like for us, with a view to the 35th anniversary in 2020 of the signing of the Protocol establishing Piraeus and Shanghai as sister cities, to renew our oath of friendship and move forward into a new era of multilateral and mutually beneficial cooperation,” he added.

“In that context, I should like to once again request your commitment to moving forward as quickly as possible with specific initiatives that will make your contribution to the people of Piraeus immediately and palpably visible in the daily life of our city.”

For his part, Mayor Moralis extolled the investment of the Chinese in Piraeus even as he underscored the importance of making a social contribution to local society. He declared the desire of the municipality to establish cooperation with Cosco and to further strengthen the company’s relationship with the citizenry.

“We want Cosco’s presence in the Port of Piraeus to have a positive impact on local society and for Piraeus to benefit from this cooperation,” Moralis said.

In that context, he stressed the growth opportunities that the investment creates for the city.

The mayor also briefed the Chinese delegation on the positive prospects of the city that arise from the exploitation of its comparative advantages that is already underway.

Moralis noted that aside from the port important infrastructure projects are in the works, including the Metro, which will enhance the life of the city and help solve the traffic problem, which is in part the result of the operation of the port.

The mayor outlined the municipal investment package which has stirred optimism about the city’s future.
He expressed confidence that with the completion of the related projects Piraeus will definitely be a more contemporary, functional, and friendly city.

Moralis stressed that although Piraeus is a small city in comparison to Shanghai it plays a strategic, geographic role for all of Greece and for Europe as it is an important gateway.

Strong interest
Shanghai Mayor Ying Yong spoke of the ties between the two cities and the benefits arising from Cosco’s investment in the Port of Piraeus.

He underlined the city’s important geographic location and the importance of stimulating entrepreneurial interest for businesses to invest.

In conclusion, Ying Yong invited Moralis along with a municipal delegation comprised of represenatatives of business, educational, and athletic organisations to visit Shanghai in November.

Noting the importance of further cooperation with Piraeus, Cosco Managing Director Xu Lirong stressed the company’s ties with the city and underlined that Greece’s premier port is one of the most rapidly growing globally.