In the month-long general election campaign, ND and SYRIZA will work toward limiting defections to other parties. ND will call on the electorate to hand it a strong single-party absolute majority in Parliament 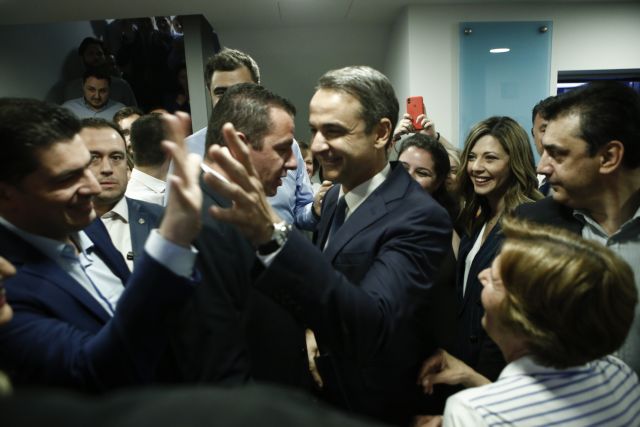 New Democracy achieved a major political victory in the 26 May European Parliament election with over 33 percent of the vote and a 9.5 percentage point lead over ruling SYRIZA, which had placed the bar for a limited, manageable defeat at five percentage points.

SYRIZA managed to improve its position when compared to various polls over the last four years that gave ND a lead of over 10 percentage points, but the results dashed its hopes of minimising the spread by means of an economic stimulus package with generous benefits and tax cuts announced nearly three weeks before the election.

Tsipras opted for a major gamble by framing the election as a referendum on his stimulus package and for the first time in nearly four years he lost the bet.

Momentum for ND ahead of general election

Nevertheless, the European Parliament election result confirmed two-party predominance. The centre-right pole of ND and the centre-left pole of SYRIZA garnered an aggregate 60 percent of the vote.

The 7.5 percent of the vote garnered by the centre-left Movement for Change represents a significant victory in an extremely polarised political climate that tends to tightly squeeze smaller parties.

However, the result in no way threatens – at least for now – the hegemony of SYRIZA in the pool of centre-left voters who once upon a time flocked en masse to Pasok.

Smaller parties and the protest vote

Velopoulos managed to absorb a substantial chunk of the protest vote that once went to extreme-right, neo-Nazi Golden Dawn and the far right populist Independent Greeks party which for four years was SYRIZA’s junior coalition partner.

They benefited from the fact that the Greek electorate has often seen the loose European Parliament vote as an opportunity to register its disapproval of government policies.

The 4.6 percent of the vote garnered by the far right, populist, ultra-Orthodox, and Russophile Elliniki Lysi (Greek Solution) party created Kyriakos Velopoulos is believed to have grabbed votes from the base of neo-Nazi Golden Dawn and the Independent Greeks.

Some pundits have describe Elliniki Lysi as the “Russian party”.

Velopoulos has bought many hours daily on small local television stations around the country on which he rants in prime time slots and sings the praises of Vladimir Putin (whom he has met) and selling copies of manuscript letters that he claims were written by Jesus Christ.

The source of his funding is unclear as there is no indication of financial transparency in the party.

Velopoulos is the only party member with any nationwide recognition.

Varoufakis an on a strong Eurosceptic platform and appears to have absorbed the remnants of the anti-bailout memorandum vote which was also pursued by SYRIZA’s former Parliament Speaker Zoi Konstantopoulou’s Plefsi Eleftherias (Sailing to Freedom) and former SYRIZA minister Lafazanis’ LAE (Popular Unity) party, which has waged a major activist battle against home foreclosures and auctions.

They were among the dozens of SYRIZA MPs who fled the party after Tsipras in the summer of 2015 ignored the overwhelming no vote in a referendum he called on approval of the bailout deal offered by the EU and signed the third (and some say the harshest) bailout memorandum.

The three parliamentary parties that were crushed by the political polarisation between ND and SYRIZA were the centre-right To Potami, the centre-right Centrists’ Union, and the Independent Greeks.

In the month-long general election campaign, ND and SYRIZA will work toward limiting defections to other parties.
ND will call on the electorate to hand it a strong single-party absolute majority in Parliament by drawing right-wing and centrist voters.

SYRIZA will attempt to lure back leftist voters who distanced themselves from the party due to the government’s implementation of the neo-liberal austerity policies of the third bailout memorandum which it signed.

Its campaign is once again expected to adhere to its class-based dichotomy between “the many” have nots that it claism to represent and the rich “elites” which it claims New Democracy represents with neo-liberal policies.
That argument was flatly rejected in the European Parliament election.

It will also attempt to lure back the substantial chunk of its 2015 base that flocked to New Democracy, which slammed Tsipras as a hypocrite who claims to represent the poor even as he hobnobbed with the rich and vacationed (in August, 2015) with the luxury yacht of a wealthy shipowner.