New Democracy is the undisputed victor of the European Parliament elections and its dominance in almost the entire country is complete and leveling. 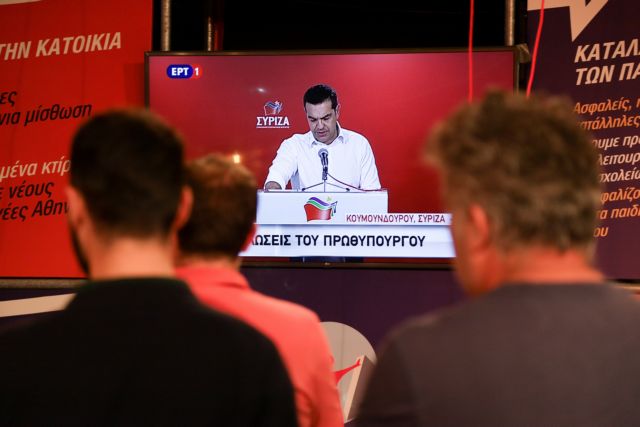 Greeks sent a clear and resounding message with their vote in yesterday’s European Parliament and local elections.
They denounced the SYRIZA government and the PM personally as he shouldered the entire weight of the European Parliament election campaign.

Tsipras himself asked voters to treat the Europarliament elections as a vote of confidence in the government. He declared that that he would view the result as a message of approval or disapproval of his policies.The response of the vast majority of voters was catalytic as they signaled that they do not trust him and that the effort to buy their vote with benefits will not pass.

New Democracy is the undisputed victor of the European Parliament elections and its dominance in almost the entire country is complete and leveling.

Mr. Tsipras’ decision to call snap elections was unavoidable as neither he nor his party could manage such a devastating defeat.

ND’s landslide was distinguished by the fact that as first party it had by far the largest lead over the second party in all European Parliament elections held in Greece from the first one in 1981.

The disharmony between the will of the electorate and the ruling majority is now patently obvious.

As it turned out it was not the opinion polls that constituted fake news but rather the crude propaganda of SYRIZA and its mouthpieces.

It is equally obvious that the country cannot withstand another protracted campaign with an even more divisive clash.
Tsipras governed for four years by dividing the Greek people, targeting his political opponents, and undermining institutions.
As he confessed, he had harboured a series of self-deceptions and led the country into economic advdentures only to later implement policies that he had previously denounced.

Still, he did not abandon his ideological fixations and he severely tested the economy and society with over-taxation designed to exceed primary surplus targets and to distribute the money as the putative protector of the poor and vulnerable.

Greece and its citizens after many years of sacrifices seek a path that can offer true hope.

It is time for the cycle of populism and division to close.

Greece should and can turn a page, leave behind the traumatic years of the crisis, and regain its lost vitality by offering prospects for its youth.

With his decision to call snap elections, Mr. Tsipras has accepted his defeat and is ceding power.

It would be well if in the weeks leading up to the general election he does not lead the country into an extreme clash that could prove devastating for the economy.