Whose Europe is it anyway?

The IMF’s report underlines that the delay in the restructuring of the debt undermined the prospects of a Greek economic recovery and questions the efficacy of the 2012 haircut on the Greek debt (PSI). 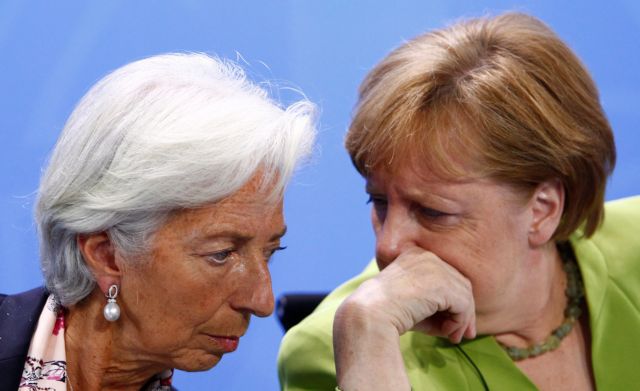 Christine Lagarde, Managing Director of the International Monetary Fund (WMF) and German Chancellor Angela Merkel speak as they attend a news conference after a meeting in the chancellery in Berlin, Germany, June 11, 2018. REUTERS/Michele Tantussi

In evaluating its programme to “rescue” Greece, the International Monetary Fund directly and clearly admits what we all knew: – that the purpose of the programme was not to rescue Greece but to save the banks of the eurozone.

With absolute cynicism the Fund concedes that it made tragic mistakes.

In the framework of an evaluation of the bailout programmes that were implemented between 2008 and 2017, the Executive Board of the Fund has in many instances pinpointed important miscalculations and omissions.

Particularly in the case of Greece the wise members of the Board admit that the way the viability of the Greek debt was approached at the start was wrong-headed.

They say that disproportionate emphasis was given to fiscal adjustment and that macroeconomic projections were overly optimistic.

The report underlines that the delay in the restructuring of the debt undermined the prospects of a recovery of the Greek economy and it questions the efficacy of the 2012 haircut on the Greek debt with Private Sector Involvement (PSI).

Of course, these belated admissions mean nothing to the Greeks, who saw their standard of living hitting rock bottοm, the GDP of their country plunging, unemployment skyrocketing, young people emigrating, and many people committing suicide due to their economic dire straits.

While the IMF admitted that it made a mess of things, the European Union remains blissfully indifferent.

In fact, German Chancellor Angela Merkel recently reiterated that the reforms in Greece proved correct, although she admitted that the burden on the Greek people was enormous.

“We helped those who were in need,” Merkel said.

What she omitted to mention that those who were saved were the German and French banks which were exposed to the Greek debt.

Responding to a question about the moniker “Chancellor of austerity and of migrants” that has been assigned to her, Merkel said that she does not concern herself with petty things.

“What counts is that the monetary union and the euro endured,” she said.

This Sunday as we vote in European Parliament elections it would be well to remember that this united Europe does not stand for people prospering, but exclusively for the monetary union and the euro.