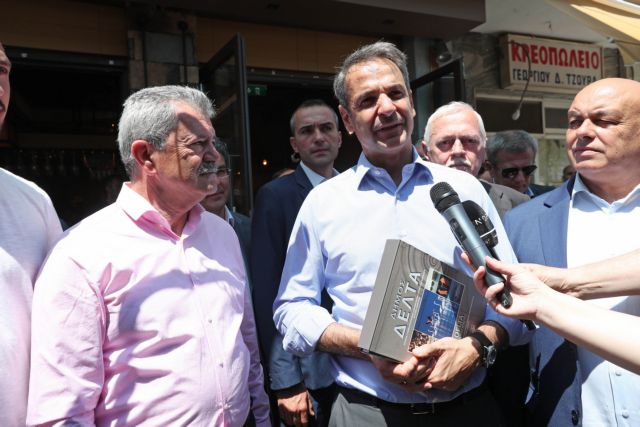 Mitsotakis’ choice of Thessaloniki to wrap up his campaign was linked to his staunch opposition to the Greece-North Macedonia Prespa Agreement, which is extremely unpopular and a vote-getter there.

Main opposition New Democracy leader Kyriakos Mitsotakis stressed his law and order platform, his opposition to the Prespa Agreement, and his opposition to pre-election handouts during the last two days of the European Parliament and local elections campaign in Florina and Thessaloniki.

Mitsotakis’ choice for his final outdoors campaign speech tonight of the northern port city which is the capital of the province of Macedonia was linked as he has said in large measure to his staunch opposition to the Greece-North Macedonia Prespa Agreement.

The agreement is hugely unpopular in the province because of its recognition of a Macedonian language and nationality.

Mitsotakis has said that he will work to ameliorate what he views as its negative repercussions.

The largest part of the geographical region of Macedonia – 51 percent, including the territory of ancient Macedon – lies within the Greek state. The rest is mainly in North Macedonia and partly in Bulgaria.

On 23 May, Mitsotakis played up his stance on the agreement, which he says unnecessarily divided the Greek people.

“It is no coincidence that I chose to be with you here in Florina three days before the election. I do not in any way want this beautiful and blessed land, Prespes, to be associated in the people’s consciousness with a bad agreement that offended the vast majority of the Greek people and did not serve national interests,” Mitsotakis declared.

Opinion polls at the time the agreement was signed showed that about two-thirds of Greeks opposed it.

Security is one of the main planks of New Democracy’s European Parliament campaign, as it will be in the general election campaign, which effectively begins on 27 May, regardless of when parliamentary elections are held.

Many now believe that Tsipras will call snap elections for the end of June despite the fact that he has insisted that he will serve out his term through September.

Mitsotakis has for months been hammering the government over public order issues – from a rise in violent crime, to the strong presence at some universities campuses of drug dealers and of anarchists who manufacture firebombs there  (by exploiting university asylum which forbids police from entering the campus if not called in by university officials), to the state of lawlessness in the Athens neighbourhood of Exarcheia which is an anarchist and anti-authority hotbed, to furloughs for prisoners serving multiple life citizens.

Mitsotakis has vowed to abolish university asylum, to clean up Exarcheia, and to abolish furloughs for those serving multiple life sentences, such as the former N17 terrorist group’s top gun, Dimitris Koufodinas.

He has also vowed to build at least one maximum security prison where terrorists and others convicted of heinous violent crimes would serve out their sentence.

The conservative leader on all campaign stops over the last two weeks has blasted what he views as the political opportunism of Prime Minister Alexis Tsipras’ economic stimulus package, which was announced on 8 May and includes a number of permanent benefits and tax cuts.

Mitsotakis has made tax cuts – both on personal income tax, real estate taxes, and business taxes – another main campaign plank.

He has vowed to slash hugely unpopular ENFIA real estate tax by 30 percent across the board in his first two years in office.

Like Tsipras, he has vowed not to enforce the legislated lowering of the tax-free ceiling which is currently scheduled to take effect on 1 January, 2020.

Although it has voted in favour of those benefits, including a half-month’s pension as a bonus for retirees, New Democracy has described them as a desperate act of political opportunism.

In a speech in the Western Macedonian city of Florina, Mitsotakis described the benefits as political fraud.

“You yourselves know whether these little consolation gifts can cover even to the slightest degree the great losses that you have suffered all these years. They [SYRIZA] speak to pensioners about a 13th [monthly] pension check. These are the people who eliminated the EKAS [poor pensioners’ stipend established under Pasok] and cut all pensions,” Mitsotakis said.

Tsipras and SYRIZA counter that between the start of the bailouts in 2010 and January, 2015, when SYRIZA came to power, previous governments [Pasok alone at first and then in a coalition with New Democracy] cut pensions a dozen times.