In a debate with opposition VMRO-DPMNE leader Hristijan Mickoski, Zaev also noted that Tsipras had initially accepted the name Republic of Ilinden Macedonia. 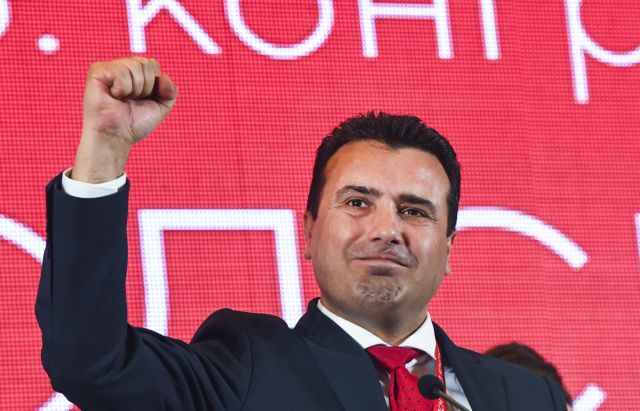 epa07411290 The Prime Minister and leader of the ruling Social Democrats Zoran Zaev greets delegates as he announces the country's coordinator for the NATO accession, after announcing him as presidential candidate in an upcoming election on a party convention in Skopje, North Macedonia, 03 March 2019. The coalition between the ruling SDSM and DUI will run in the upcoming Presidential election with Professor Stevo Pendarovski who is a candidate for the President of the Republic of North Macedonia for the second time. The first round of the election is scheduled for 21 April 2019. EPA/GEORGI LICOVSKI
Share

North Macedonia’s Prime Minister, Zoran Zaev, has said that he agreed to change his country’s name and Constitution because PM Alexis Tsipras accepted the existence of a “Macedonian identity”.

In a debate with opposition VMRO-DPMNE leader Hristijan Mickoski, Zaev also noted that Tsipras had initially accepted the name Republic of Ilinden Macedonia.

Zaev said that the idea was scrapped due to an uproar among opposition parties in Greece. The name refers to an uprising that is widely viewed as the strongest symbol of the historical irredentism of Greece’s northern neighbour.

Zaev said that the “Macedonian language” and “Macedonian identity” are “shining in the UN”.

“Macedonian is the language of Macedonians all over the world, in the diaspora and in the fatherland. It is the official language that is recognised everywhere. It is part of the identity of the Macedonian people as guaranteed in the Constitution,’ said the PM of North Macedonia.

Zaev fiercely defended the Prespa Agreement on the grounds that it paves the way to the admission of North Macedonia and the EU, while Mickoski argued that the accord harms his country’s national interests.

Despite being pressured by the moderator and Zaev to say whether his party will honour the agreement if it comes to power, the main opposition leader refused to answer.