Erdogan – who is seeking to drum up support for his Islamist-rooted AK Party in March 31 local elections – said on Tuesday Turkey would make the suspected attacker pay if New Zealand did not. 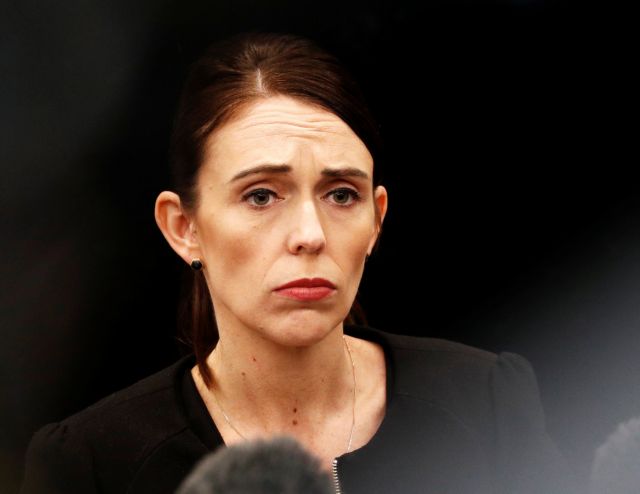 New Zealand's Prime Minister Jacinda Ardern attends a news conference after meeting with first responders who were at the scene of the Christchurch mosque shooting, in Christchurch, New Zealand March 20, 2019. REUTERS/Edgar Su
Share

New Zealand Prime Minister Jacinda Ardern said on Wednesday Foreign Minister Winston Peters will travel to Turkey to “confront” comments made by Turkish President Tayyip Erdogan on the killing of 50 people at mosques in Christchurch.

Australian Brenton Tarrant, 28, a suspected white supremacist, was charged with murder on Saturday after a lone gunman opened fire at the two mosques during Friday prayers.

Erdogan – who is seeking to drum up support for his Islamist-rooted AK Party in March 31 local elections – said on Tuesday Turkey would make the suspected attacker pay if New Zealand did not.

The comments came at a campaign rally that included video footage of the shootings that the alleged gunman had broadcast on Facebook.

“Our deputy prime minister will be confronting those comments in Turkey,” Ardern told reporters in Christchurch. “He is going there to set the record straight, face-to-face.”

Erdogan has referred to the mosque shootings several times during public gatherings in recent days.

Turkish Presidential Communications Director Fahrettin Altun said comments made by Erdogan on Monday during the commemoration of the 1915 Gallipoli campaign were taken out of context, adding he was responding to the attacker’s “manifesto”, which was posted online by the attacker and later taken down.

“Turks have always been the most welcoming & gracious hosts to their Anzac visitors,” Altun said on Twitter, using the abbreviation for the Australian and New Zealand Army Corps.

“As he was giving the speech at the Canakkale (Gallipoli) commemoration, he framed his remarks in a historical context of attacks against Turkey, past and present.”

During his speech on Monday, Erdogan described the mass shooting as part of a wider attack on Turkey and threatened to send back “in caskets” anyone who tried to take the battle to Istanbul.

Peters had earlier condemned the airing of footage of the shooting, which he said could endanger New Zealanders abroad.

Despite Peters’ intervention, an extract from Tarrant’s alleged manifesto was flashed up on a screen at Erdogan’s rally again on Tuesday, along with footage of the gunman entering one of the mosques and shooting as he approached the door.

Meanwhile, Australian Prime Minister Scott Morrison said he summoned Turkey’s ambassador for a meeting, during which he demanded Erdogan’s comments be removed from Turkey’s state broadcaster.

“I will wait to see what the response is from the Turkish government before taking further action, but I can tell you that all options are on the table,” Morrison told reporters in Canberra.

Australia’s ambassador to Turkey would meet with members of Erdogan’s government on Wednesday, Morrison said.
Morrison said Canberra is also reconsidering its travel advice for Australians planning trips to Turkey.