Spyraki said that for New Democracy any change to parliamentary rules is a non-starter and she called upon Parliament Speaker Nikos Voutsis to not even raise the issue. 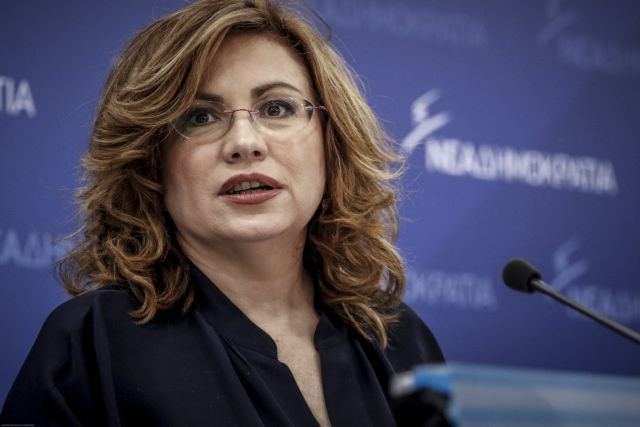 Main opposition New Democracy is hammering Alexis Tsipras with charges that he is being blackmailed after the PM asked Parliament Speaker Nikos Voutsis to scrap plans to change parliamentary rules so that leaders of parties that do not have the five MPs needed to constitute a recognised parliamentary group can still retain the privileges of a parliamentary party leader.

The proposed change was widely viewed as tailor-made for SYRIZA’s former coalition partner, Panos Kammenos and his Independent Greeks party, which after the defection of MPs is about to lose its status as a parliamentary party.

Spyraki said that for New Democracy any change to parliamentary rules is a non-starter and she called upon Parliament Speaker Nikos Voutsis to not even raise the issue.

After the uproar in response to the proposed rules changes, Tsipras wrote a letter to Voutsis requesting that nothing at all be changed and declaring that he is not being blackmailed as ND charges.

Spyraki dismissed the letter as too little too late and underlined that it took the PM one week to div out how he will manage Kammenos’ alleged blackmailing.

She also criticised the PM for the manner in which he addressed the Parliament Speaker.

“Mr. Tsipras needed a week to decide how to deal with Mr. Kammenos’ blackmailing. The Prime Minister, who is relying on the whims of Megaloeconomou and Papachristopoulos, is addressing the Parliament Speaker as if he were his subordinate, forgetting that in democracies Parliament checks the power of the government and the government does not check Parliament,” Spyraki stated.

“Throughout this process Mr. Tsipras managed to demonstrate that his parliamentary majority is opportunistic and that he is ready to cave in to the demands of his once irreplaceable coalition partner,” Spyraki declared.

“On 26 May we shall hold [local and European Parliament] elections. The sooner the general election is held the better, so that this degenerate situation which does not benefit the country and harms Greeks can end,” she said.