Editorial: The heavy price of the Prespa Agreement

Mr. Tsipras went through fire and water in his effort to pass the agreement. The weight proved to be very great and it will certainly haunt the government for some time, or perhaps forever. 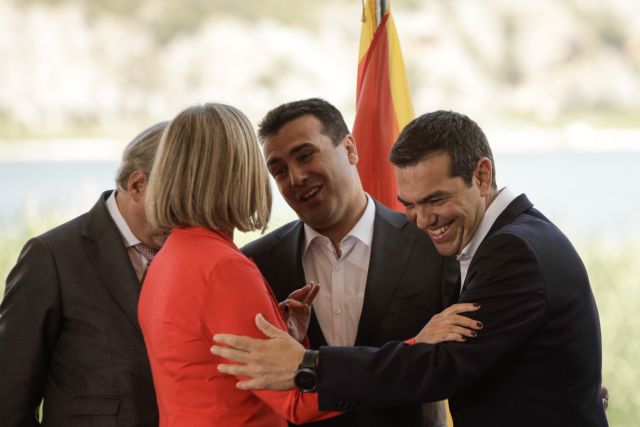 The day after the ratification of the Prespa Agreement by the Greek Parliament, the country’s political forces are nervous and in a process of regrouping due mainly to the intensity of the public’s reaction and the atmosphere of national defeat after the approval of the accord.

The government was shaken by this process and the relief that its cadres felt after the ratification vote was indicative.

Undoubtedly, Mr. Tsipras went through fire and water in his effort to pass the agreement. The weight proved to be very great and it will certainly haunt the government for some time, or perhaps forever.

With his choice Mr. Tsipras wanted to score a victory linked to the identity of the left wing, with the aim of binding its voters by offering the impression of a dynamic intervention on a national issue.

He did not, however, gauge the intensity of the reactions. Those monitoring events in northern Greece say that the government injured the sentiments of citizens in a cruel manner and that after the passing of the agreement the climate worsened for SYRIZA and for the PM personally.

It is no coincidence that the day after the ratification the PM shifted the public dialogue from the national to the social field by announcing a hike of the monthly minimum wage to 650 euros. He will continue doing the same on other issues in order to temper negative impressions.

By all accounts, politics in northern Greece have been determined by the Prespa Agreement and are not going to change.

Undoubtedly, this national issue isolated SYRIZA and limited its audience while allowing New Democracy to rally its forces and to expect excellent results in Macedonia and Thrace.

One should also note the opportunity that the agreement offered to anti-systemic political forces of the extreme right, especially Golden Dawn.

Golden Dawn’s members in Macedonia concealed the party’s hideous, Nazi face under the Greek flag and the sun symbol of ancient Vergina and are taking the lead in violent reactions.

The extreme right benefited from the radicalisation stirred by the national issue in the broader right wing. Many believe that it is jockeying for third place in the next general election (after New Democracy and SYRIZA), and that could cause problems in efforts to form a coalition government if the first party on its own lacks a parliamentary majority.

That is perhaps the worst result of Mr. Tsipras’ indiscriminate support of the Prespa Agreement. He may claim that he scored a victory against nationalist forces on both sides of the Greek border, but nothing confirms that to date.

Indeed, many believe that there may be complications in implementing the agreement, with a clear danger of being ridiculed.

In any event, the Prespa Agreement will continue to impact on the country’s politics in a variety of ways.

Games in the murky waters of lakes such as Prespes were never easy and always concealed unexpected twists and turns.