Amvrosios exhorted the faithful to “spit upon” LGBTQ people. 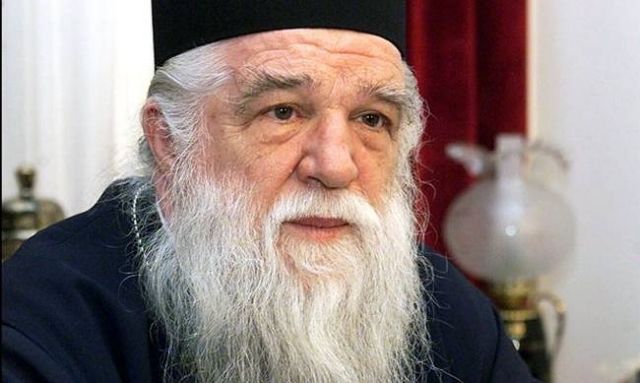 Metropolitan bishop Amvrosios of Kalavryta and Egion was convicted today by a three-judge lower court on charges of publicly inciting racist violence and abuse of religious office for an extreme homophobic article published on his website.

He was handed down a seven-month suspended sentence.

The December, 2015, article was entitled “The dregs of society are getting uppity!”

Amvrosios exhorted the faithful to “spit upon” LGBTQ people. In the past when parliament passed the partnership agreement that applied to same-sex couples he ordered that the church bells throughout his diocese ring in mourning.

«Spit on these degenerate people! Denounce them! They are abortions of nature! They are psychologically and spiritually sick! They are people with mental disturbance,» the Metropolitan bishop wrote.

He was acquitted by a one-member lower court but that decision was appealed by prosecutors in Patras and Egion.

Prosecutor sought acquittal
Before the verdict was delivered, the prosecutor had argued for the acquittal of Amvrosios on the grounds that despite his “sharp” expressions, his speech did not have the power to incite people or groups to engage in extreme actions against others.

In addressing the court Amvrosios declared his innocent and showed no regret or remorse. “I am not interested in whether my text could trigger an act of prejudice against homosexuals…Homosexuals can do whatever they want, but they cannot provoke. This (provocation) obliges us to harden our stance…Using the words “Spit on them” is the most lenient manner in Christian speech,” he declared.

“I did not write all these things with malice but rather to protect society. My aim was to name the sinful passion, and not the plaintiffs,” he said. “The plaintiffs are serving some ulterior motive and that is why they are doing all this. They are out of step with the place and time,” the Metropolitan bishop added.

In his court testimony, Amvrosios disputed the authority of the court. “The court does not have the competency to judge me as a bishop and I cannot understand why today I am being charged for my love of Christ,” he declared.

He went as far as to liken himself to Saint Paul.

“If you would have convicted the Apostle Paul then it is logical for you to convict me. The civil partnership agreement legalises sodomy and it violates the word of God,” Amvrosios said.

If the bishop had a gun

As regards his statement that, “If I had a gun and if the law allowed me I would use it to get this over with,” the Metropolitan bishop said he was joking.

“Are they so illiterate that they cannot distinguish between the serious and the humorous? They skew and misinterpret to muzzle all those who react so that they can act without limits, advertise their passions, hold their parades, and curse things divine.”