Kammenos is now trying to lure independent MPs who have left or have been expelled from other parties, 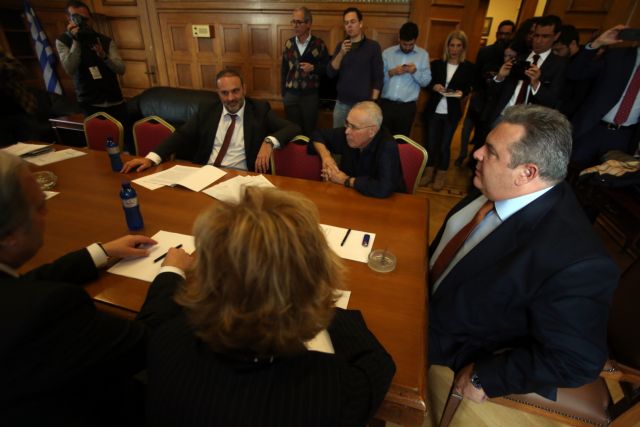 A party needs at least five MPs to maintain a recognised parliamentary group and ex-defence minister Panos Kammenos is struggling to secure that number as his own MPs are abandoning his Independent Greeks party in order to support the government in the 16 January confidence vote and in the vote to ratify the Prespa Agreement.
Independent Greeks MP Thanasis Papachristopoulos, Tourism Minister Elena Kountoura (who was just today expelled from the party), and Deputy Agriculture Minister Vasilis Kokkalis have all said they will give the government their confidence.

Kammenos lashed out at Kountoura in a tweet. “Ms Kountoura in a formal statement decided to trade her vote and the name Macedonia for a ministerial post. As of now I have expelled her from the Independent Greeks parliamentary group.”

Kammenos is now trying to lure independent MPs who have left or have been expelled from other parties, such as Aristides Fokas, formerly of the Centrists’ Union, and Nikos Nikolopoulos, formerly a New Democracy MP, as was Kammenos.

Fokas said that he is prepared to collaborate with any democratic party [meaning not Golden Dawn] that is against the Prespa Agreement.

There is also an effort to recruit former Golden Dawn MP Dimitris Koukoutsis, who is now an independent.