Gavroglu: Tsipras-Ieronymos pact to be implemented fully or not at all

Ieronymos found that many in the hierarchy of Metropolitan bishops were livid over the agreement, and they issued a communiqué stating that they will not accept priests being taken off the registry of civil servants. 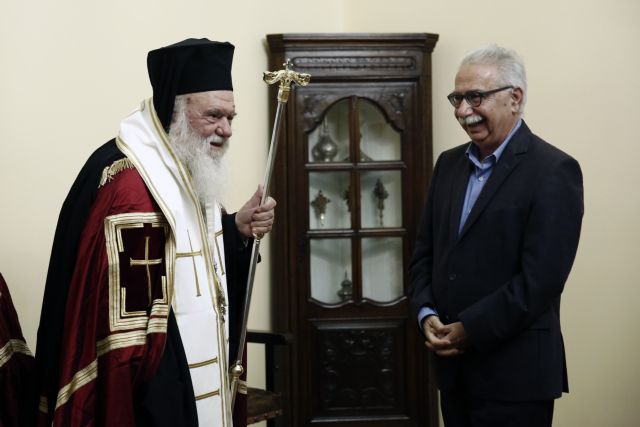 The government will pass into law all 15 points in the accord agreed to between Prime Minister Alexis Tsipras and Archbishop Ieronymos of Athens and All Greece, said Education, Research and Religious Affairs Minister Kostas Gavroglu.

The minister underlined that the agreement is a take it or leave it deal, as it will either be implemented in its entirety or not at all.

Ieronymos found that many in the hierarchy of Metropolitan bishops were livid over the agreement, and they issued a communiqué stating that they will not accept priests being taken off the registry of civil servants.

That was one of the most important provisions for Tsipras, who hastened to announce that he plans to hire 10,000 more civil servants to replace as many priests. Under the agreement, priest and lay employees will be paid the same salary, but it will be given to the Church to disburse to them.

Ignoring the strong reaction of the Church hierarchy and simple priests, Gavroglu told news247 that all 15 points in the accord will be enshrined in a draft law, including the change in the way the clergy is paid and their civil servant status.

Gavroglou exuded an air of optimism regarding implementation of the deal, and said that there is time to iron out differences and implement the accord before the next general election.

Gavroglu declared that the agreement is historic and unprecedented, and that many are irked by it because they believed that such a deal could never be reached.

“We are inaugurating something more with the proposals that we will thresh out. That is the intention of both the Prime Minister and the Archbishop to proceed with a rationalisation of Church-State relations and to determine these relations through dialogue and not clashes,” Gavroglu said.

“We have all the time until the elections to complete the agreement, but to get to that point certain procedures must be followed. This process is already underway, as was clearly stated by the Prime Minister and the Archbishop after the unanimous decision of the Church hierarchy. That unanimous decision makes clear that the Church wants the discussion to continue,” Gavroglu said.

“However, an historic agreement such as this requires caution, so as not to be dragged about by the populist tendency of parties that believe that they can make deals with the Church and those who serve it. We do not engage in transactions. We reach open and public agreements,” Gavroglu declared.