The defence minister is a walking time bomb. In the face of his personal political impasse,he is ready at any given moment to raise tensions, and create turbulence, in order to negotiate his political salvation. 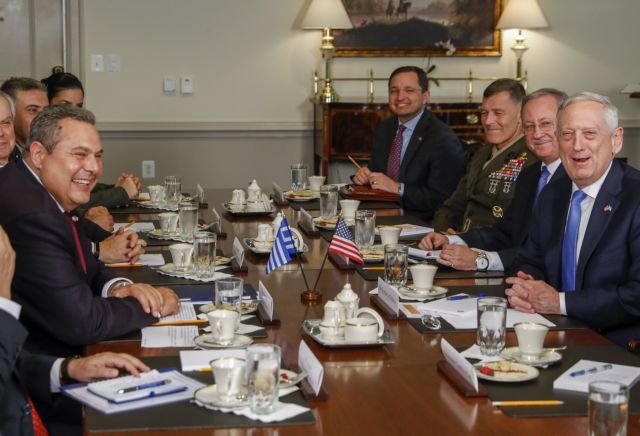 It has long been known that this government is either entirely uncoordinated or the channels of communication between the ruling coalition partners are so confused that they lose sight of the ball.

Until now, it was a given that in a regular country, foreign policy is determined the prime minister in cooperation with the foreign minister.

Yesterday, we learned another minister can, unhindered, create a new defence dogma, decide alliances and plot out military bases in other countries, be called to order politely by the prime minister, and no one reacts.

The shoddiness, immodesty, and opportunism of the defense minister are known to all. The issue is not the inane statements made every so often by every bitter and burnt minister. It is the mayhem prevailing in the government.

At a moment that the prime minister is going all out to push forward the Greece-FYROM Prespa Agreement, his minister and coalition partner – not at any inconsequential meeting, but at a meeting with American counterpart, Jim Mattis – presented his plan for Balkan alliances and other nonsense.

As if that were not enough, he proclaims that the US is the “sole strategic partner” of Greece. Moreover, he urges the US not to limit itself to the Souda base in Crete, but to create new bases in Volos, Larisa, Alexandroupolis, and wherever else suits it.

As for the FYROM naming issue, the government limited itself to a leak that it respects FYROM Prime Minister Zoran Zaev’s efforts to pass the constitutional amendments mandated by the agreement, and remained silent on all else.

It is by now obvious that the defence minister is a walking time bomb. In the face of his personal political impasse, with his party polling under the three percent threshold to enter parliament, he is ready at any given moment to raise tensions, and create turbulence, in order to negotiate his political salvation.

The prime minister tolerates his behaviour and treats him with kid gloves, so that the national-popular alliance that he has forged may be preserved, until conditions are ripe to declare elections.

That scenario may suit Mr. Tsipras, but the country cannot withstand any more dangerous power plays. If the prime minister wants to be held hostage by his minister, that is his problem. He cannot, however, leave an entire country at the mercy of an adventurist and opportunist, whose only concern is his own survival.