Hundreds march to protest circumstances of death of Zak Kostopoulos

After an autopsy, coroners concluded that there is “an undetermined cause of death”. The report mentions nothing about the beating, which has been described by some as a lynching. 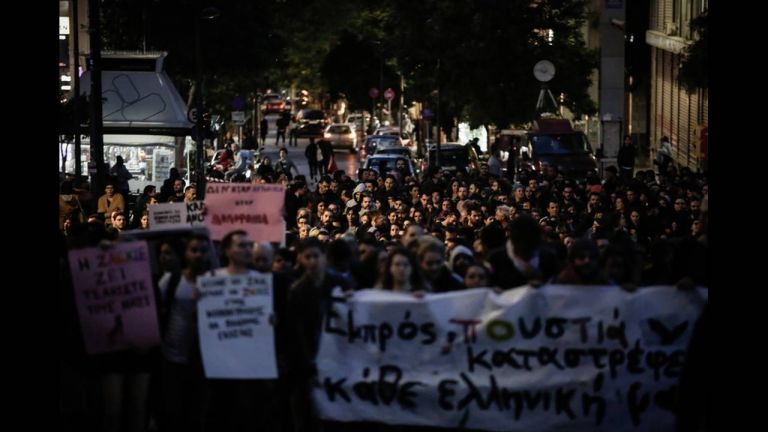 Hundreds of protesters joined a march to protest the circumstances of the death of 33-year-old Zak (Zacharias) Kostopoulos, who died after being beaten and kicked in the head, after entering a jewelry shop near Omonia Square, allegedly to rob the owner.

“He entered the shop without a weapon, without a mask, and without gloves. What robber enters a shop to steal like that?” said Zak’s father, Efthimios Kostopoulos, who returned from the US for the funeral. He said that he had information that his son fled from an argument at a nearby café and entered the shop in order to protect himself.

That account was put forward by LGBT activist Grigoris Valianatos, who demanded that CC TV footage from shops and streets in the area be examined by police.

The deceased was a heroin addict and gay LGBT activist. As a transvestite, his moniker was Zackie O.

After an autopsy, coroners concluded that there is “an undetermined cause of death”. The report mentions nothing about the beating, which has been described by some as a lynching.

However, a video recorded on a cell phone by an eyewitness showed Kostopoulos trapped in the shop and trying to smash the door window with a fire extinguisher in order to exit through the locked door. When he crawled into a lower showcase on all fours in an effort to break the window and escape, the owner and another man were seen furiously kicking him in the head, and the 73-year-old owner stepped on his head.

Police who came to the scene struck him with a club and handcuffed him while he was prostrate and unconscious. All of the above is on video shown on all Greek broadcast stations.

In today’s protest march from Omonia Square to Syntagma Square and finally to the jewelry shop, members of the LGBT joined hands with extra-parliamentary Left groups, anti-authority groups, and other citizens.
“Rage and sorrow, Zackie we will miss you” was the catchphrase of the march.

Examined by an investigating magistrate today, the shop owner described his reaction as “unfortunate”.
“I was in a state of intense agitation, due to the man’s behaviour. He had illegally entered my shop and had completely destroyed the window pane. Taking into account the unrest in the shop and the removal of valuable merchandise, and because the police had not yet arrived and there was a danger that the man would come outside in a state of frenzy, I acted to defend my life and property.”

The owner was released by police. He was barred from leaving the country, and must appear at a police precinct once every month, pending trial.

In the text calling for the protest, the organisers articulated a very different view.

“On Friday at midday, there was the murder of Zak Kostopoulos – a gay, HIV-positive activist, and drag queen known as Zackie O. He was murdered in Omonia by two macho types, with the police, even though he was unconscious and on the ground, handcuffing and hitting him. From the moment of the murder, the media skewed everything and created a narrative based on the statements of the murderer and owner of the shop where the beating-murder occurred. The videos clearly show what happened. Nonetheless, the court file says nothing about the beating, the coroners’ investigation did not clearly identify the cause of death, and the media continue to misinform and target Zak as a junkie and robber.”