Zaev stresses recognition of Macedonian language, ethnicity in naming accord

“We reached an agreement, but we knew that we had to ensure language and identity. Greece also acknowledged that,” Zaev said 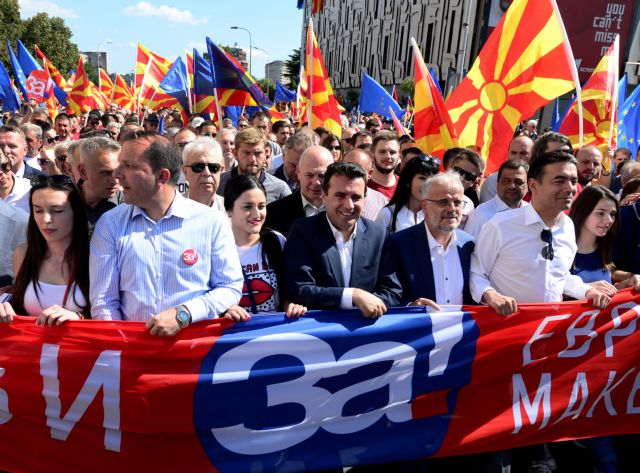 epa07025147 Macedonian Prime Minister Zoran Zaev (C) gathers with citizens and government officials to march for European Macedonia in the center of Skopje, the Former Yugoslav Republic of Macedonia, 16 September 2018. The march is in support of the referendum scheduled for 30 September following the Prespa name agreement between Greece and FYROM (Macedonia). EPA/NAKE BATEV
Share

In the midst of an intensive campaign to secure a “yes” vote in the 30 September referendum on the Greece-FYROM naming agreement, Prime Minister Zoran Zaev stressed that the agreement meets his country’s longstanding demand for recognition of a “Macedonian language and identity”.

“We reached an agreement, but we knew that we had to ensure language and identity. Greece also acknowledged that,” Zaev said, noting that the accord recognises the existence of a “Macedonian language”.

“I understand the consternation over geographical references, but I also know the benefits of the agreement,” Zaev said.

If and when the accord is implemented, FYROM will be recognised internationally and in bilateral relations as the Republic of North Macedonia.

Zaev said that the referendum “is important because we must ensure our Macedonia for the centuries to come”.