Efforts to appoint well-known centre-left politicians to the cabinet continued until the last minute. One candidate is reportedly former Pasok minister and party secretary Mariliza Xenogiannakopoulou. 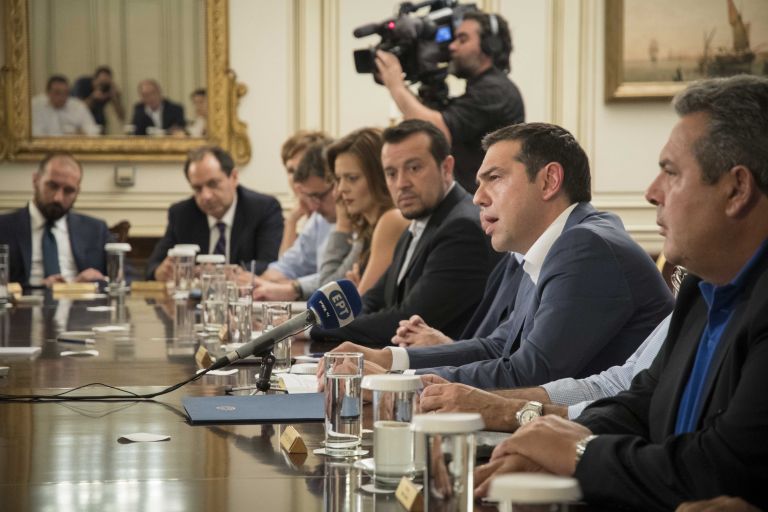 Share
Following Prime Minister Alexis Tsipras’ decision to remove Interior Minister Panos Skourletis from the government and to ensure his election to the post of SYRIZA party secretary, the long-awaited cabinet reshuffle is expected within a matter of hours, or at latest tomorrow.
Following the intra-party pangs and nagging, the PM tapped Skourletis to control a severely weakened party machine. He proceeded with the finalisation of the new cabinet appointments, and appears determined to transcend the comradely backstabbing that often precedes governmental changes.

Digital Policy Minister Nikos Pappas and Infrastructure Minister Christos Spirtzis are by all accounts the favourites to undertake the portfolio of the interior ministry – which will play a central role in the next general election. At the last moment, the name of Administrative Reform Minister Olga Gerovasili was also thrown on the table.

However, some believe that Tsipras will make a surprise pick.

The PM’s aim is to unveil a substantial cabinet makeover, which could give the government a new momentum.

Εστίαση: Εντός μηνός από την υποβολή της αίτησης η καταβολή της επιδότησης
In that context, Tsipras is expected to tap several members of the younger generation of SYRIZA cadres, as well as political divs that are not MPs, for important ministries.
Party spokesperson Rania Svigou and Kostas Zachariadis are among the younger SYRIZA cadres who are expected to get a cabinet post.
Four ministers will keep their current posts
Those who are considered certain to retain their current portfolios are Finance Minister Euclid Tsakalotos, who developed an excellent working relationship with creditors, Labour Minister Effie Achtsioglou, whose ministry plays a central role in the government’s effort to postpone legislated pension cuts, Foreign Minister Nikos Kotzias, who will have to shepherd the Greece-FYROM naming accord through parliamentary ratification, and Defence Minister Panos Kammenos, whose Independent Greeks party is SYRIZA’s junior coalition partner.
Those expected to leave the government include Shipping Minister Panagiotis Kouroumplis, Culture Minister Lydia Koniordou, and Agricultural Development Minister Yannis Tsironis.
There are conflicting reports about whether Education Minister Kostas Gavroglu and Alternate Health Minister Pavlos Polakis will remain in the government. Some expect that Polakis will remain in the government and be promoted to the rank of minister.

Courting the centre-left
Efforts to appoint well-known centre-left politicians to the cabinet continued until the last minute. One candidate is reportedly former Pasok minister and party secretary Mariliza Xenogiannakopoulou.
However, there are rumours that the PM will make a surprise, last-minute appointment of a centre-left politician whose name has not been discussed.
Filis supports central role for party
It is considered likely that former education minister Nikos Filis will once again be offered a cabinet post. He refused to accept another ministry in a previous reshuffle, after he had clashed with the Orthodox Church over religious education.
Filis, who remains a top party cadre and is considered the left-wing conscience of the party, appeared to fire warning shots during his remarks at yesterday’s SYRIZA central committee meeting.
He is a leading member of the “Group of 53”, who act as a sort of left-wing intra-party opposition.

“Memorandum commitments accompany us, but we must gradually proceed with ruptures (with creditors),” he said, adding that the party should be upgraded and play the central role that it did before the memorandum.