Tsipras: Mitsotakis is a mouthpiece of Samaras

Prime Minister Alexis Tsipras charged that main opposition leader Kyriakos Mitsotakis is a mouthpiece for ex-prime minister Antonis Samaras, who has lambasted Tsipras over the recent agreement with FYROM. 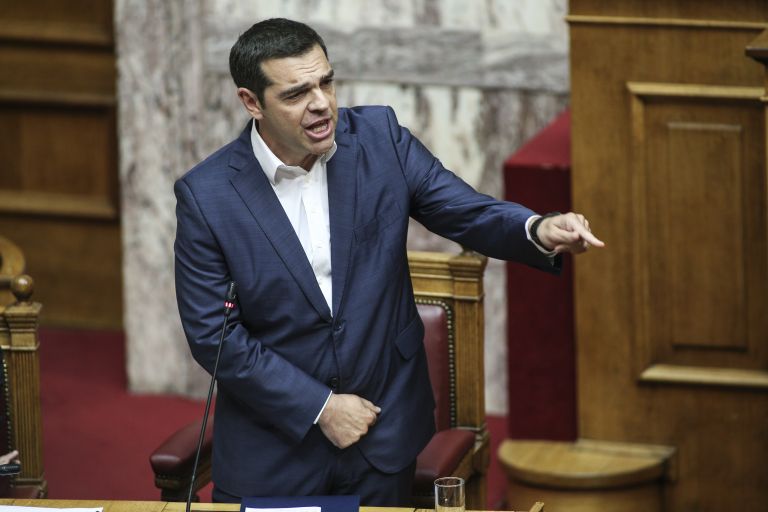 Share
Prime Minister Alexis Tsipras charged that main opposition leader Kyriakos Mitsotakis is a mouthpiece for ex-prime minister Antonis Samaras, who has lambasted Tsipras over the recent agreement with FYROM.
The attack came during yesterday’s parliamentary debate on the ombnibus bill – which was passed – that includes the last prior actions for completion of the current, last bailout evaluation.
“Today’s parliament session is historic because after eight years, we are voting on the last measures of the last evaluation of the last [fiscal adjustment] programme,” Tsipras declared.
The PM asserted that the government met its commitments and restored the credibility of the country. “I am certain that a solution will be found on the Greek debt issue, because it is the common will of everyone,” he added.
Tsipras lashed out against Mitsotakis when he announced that he would be tabling a no confidence motion (which is being debated today and tomorrow). He called MItsotakis a “pitiful mouthpiece of the real leader of New Democracy, former prime minister Antonis Samaras”.
He said he welcomed the no confidence motion and that if it did not exist one should have invented it”, as it offers an opportunity to discuss all issues.
Tsipras also unleashed withering criticism against Samaras, reminding parliament that he had toppled the then prime minister (New Democracy, the current ND leader’s late father) Constantine Mitsotakis, and that he had also attacked then president Konstantinos Karamanlis and prime minister Andreas Papandreou.
Tsipras challenged Mitsotakis’ liberal credentials and said that his stance was not in line with that of his father. “We shall be confronted by history and our responsibilities, and you will be measured against your family history, and I fear you will be considered a lightweight,” Tsipras told Mitsotakis.

As for Samaras, Tsipras said that “he built a career peddling super-patriotism, on an issue (the FYROM name) that has been an open wound for the country for the last 26 years”.