“Central Macedonia, and Thessaloniki in particular, which is pursuing a role as a pillar of development, will have only benefits from a settlement with our northern neighbours,” Tsipras said. 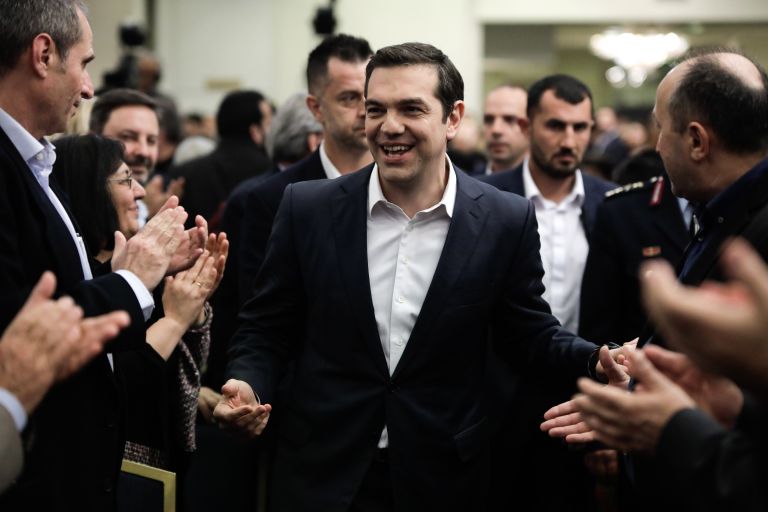 Prime Minister Alexis Tsipras paid his first visit to Thessaloniki after the huge demonstration and backlash there over the government’s positions on the FYROM naming issue, and used a party conference to prove that the issues confronting the country’s second largest city, and northern Greece in general, remain a top priority for his government.

Accompanied by a large number of top ministers, the PM in his address stressed the government’s development policies, particularly as regards plans for northern Greece, declaring that a “clean exit” from the bailout remains the top priority, as the Greek state for the first time in years will have a decisive say on the country’s economic and social policies.

After completion of the current fiscal adjustment programme in August, the government’s own, home-grown development plan will be the compass for economic growth over the coming years, the PM maintained.

“This time, no one will be able to decide about us, without us,” he declared.

Tsipras spent much of his speech defending the government’s stance on the FYROM naming issue, which has dealt a severe blow to SYRIZA base of support, not only in the Greek province of Macedonia, which has a heightened interest in the matter for obvious reasons, but in northern Greece in general.

Traditionally a conservative bastion, Tsipras over the last three years was carefully building SYRIZA’s base of support in northern Greece, with substantial moves such as pressing forward with the Thessaloniki metro project, and symbolic ones such as opening a second prime ministerial office in Thessaloniki.

The PM devoted much of his address to explaining and defending the negotiating strategy with Skopje.

He said that the government has adopted a demanding negotiating posture, the core of which is making a revision of the FYROM constitution, to remove all irredentist references, a necessary condition for a settlement.

Tsipras said this position is not the result of pressures, from civil society or abroad, but rather is designed to ensure that a settlement is viable and will endure over time.

A key point in his message was that a settlement will benefit northern Greece economically.

“Central Macedonia, and Thessaloniki in particular, which is pursuing a role as a pillar of development, will have only benefits from a settlement with our northern neighbours,” Tsipras said.