Independent Greeks to stay in coalition to the end, Kammenos declares

Kammenos said that there is an “honourable and public relationship between the two parties, without under the table dialogues, which is based on principles and the democratic process for which the Constitution provides”. 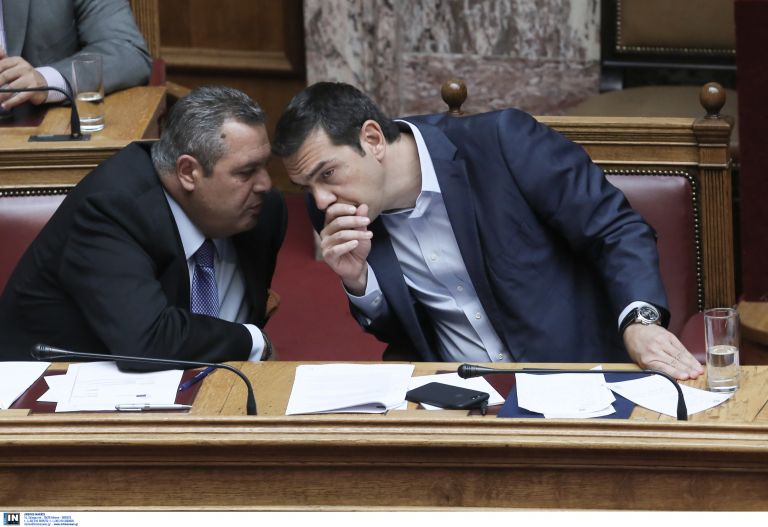 Kammenos said that there is an “honourable and public relationship between the two parties, without under the table dialogues, which is based on principles and the democratic process for which the Constitution provides”.

“Each can retain their political autonomy without one being absorbed by the other. We are going forward with what we have jointly decided, to do what we promised, which is to lead Greece out of an enormous economic crisis and the Greek people out of impoverishment,” Kammenos said.

“I can assure you that our relationship over the entire tenure of the government has been honourable and transparent. There were never secret dialogues,” Kammenos said, denying a report that he had quarreled with Tsipras, and the PM’s top advisor and minister, Nikos Pappas.

Kammenos said the government is working to forge a national line to free the two Greek officers who are being held captive in a top-security prison in the Turkish city of Edirne.

“When they were captured they were on patrol, protecting the borders of Europe. The EU must mobilise, and Nato cannot avoid taking a position,” Kammenos said, referring to the officers as “hostages”.

He said the government is doing everything possible to free the men, and stressed that there is no room for political disputes over this particular issue.

Finally, Kammenos reiterated his party’s categorical refusal to sign on to a deal with Skopje that will include the name Macedonia. He said that a revision of FYROM’s constitution to removed irredentist elements is a necessary condition for a settlement.