Military and diplomatic moves, Erdogan’s speeches and statements as well as those of other top Turkish officials, are being studied minutely by Western embassies in both Athens and Ankara, as well as by the competent directorates of Nato. 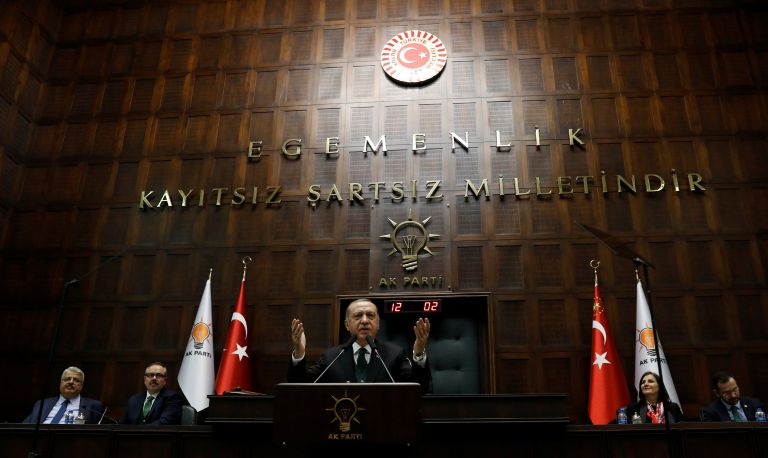 Following the abortive July, 2016 coup against Turkish President Recep Tayyip Erdogan, Western diplomacy – both Europe and the US – has been scampering to study the country’s rapid transformation and concomitant aggressiveness.

They are analysing Erdogan’s actions and objectives both domestically and on a series of foreign fronts: the Middle East, the Balkans, the Aegean, and above all the southeastern Mediterranean, where international oil and gas exploration are unfolding.

Military and diplomatic moves, Erdogan’s speeches and statements as well as those of other top Turkish officials, are being studied minutely by Western embassies in both Athens and Ankara, as well as by the competent directorates of Nato.

One observation upon which all agree is that Turkey is in a borderline situation after the coup, and particularly following the serious complications on the Syrian front.

They see that, abroad, Ankara has lost its traditional, international bases of support, and that it is on a dangerous collision course with traditional alliesm, while domestically it faces deep-seated divisions.

On the domestic front, Turkey, since the time of the sultans, implemented a policy of acceptance, recognition and tolerance towards both national and religious minorities, seeking modes of co-existence under the umbrella of a Turkish national identity.

Following the coup, Ankara has taken an unprecedented shift towards zero tolerance, and is attempting to violently homogenise the populace, which is an amalgam of ethnicities and religions.

Analysts see that in the second phase of his rule, Erdogan is attempting a violent re-ordering of Turkish society, which is alien to the country’s political history.

Ever since the time of Kemal Ataturk, the identity of Turks of Kurdish descent [once known as mountain Turks] was accepted and recognised without reservations.

Now one sees a de facto division and a common conviction that the Kurdish element is separate, and does not constitute part of Turkish national identity.

Then, one observes the deep chasm between the cosmopolitan Turks of Istanbul and the western coast of the country – who want no part of Erdogan’s religious fanaticism, and the more “backward” populations of Anatolia. The bourgeois elite do not wish to compromise with Erdogan’s homogenisation plans.

The large Alawite Muslim minority is yet another prospective locus of tension, with the Sunni majority, as they experience state oppression.

In Germany, chairs in Alawite theology have been established, and in general there are growing signs that this minority is pursuing liberties more actively.

For his part, Erdogan believes that after the Syria crisis, the Middle Eastern terrain will become more fluid, creating dangers and threats for Turkey. He wants to avert the creation of a Kurdish state in the southeastern part of the country.

Indeed, he says that at this juncture a country can gain or lose territory. His grandiose expansionist outlook reveals a desire to gain territory, while keeping in check the great domestic divide.

He is attempting at once the Turkification of the large Syrian refugee population, ands the conquest of Kurdish stronghold of Afrin.

In a campaign that has lasted 40 days so far, Turkey’s armed forces have managed to penetrate only three kilometres into Syrian territory, a distance of 30 kilometres from Afrin.

They are facing a fierce resistance and have suffered a death toll – 300 according to Turkish opposition sources – and casualties.

At the current rate, experts project that the Afrin operation will take about a year to complete.

Kurdish forces have been bolstered by an additional 1,700 men, and there are no assurances that Ankara will prevail. The environment is extremely hostile and is putting Turkey’s much-touted armed forces, which have been ravaged by post-coup purges, to the test.

If the Afrin front is problematic, then the Aegean and southeastern Mediterranean fronts may prove absolutely dangerous, and catalytic for the future of both Erdogan and his country.

American sources say that in the face of domestic divisions and international isolation, Erdogan may choose to vent his steam in the southeastern Mediterranean, especially between June and October, when oil and gas exploration are expected to reach a fevered pitch.

In that context, Erdogan will organise his claims against Cyprus and Greece. Some believe he will not hesitate to clash with the US and French Navies. If that happens, the consensus is that he will be crushed, but most do not expect matters to reach that point.

Still, various preparatory actions may be taken, to test the waters, in the Aegean.