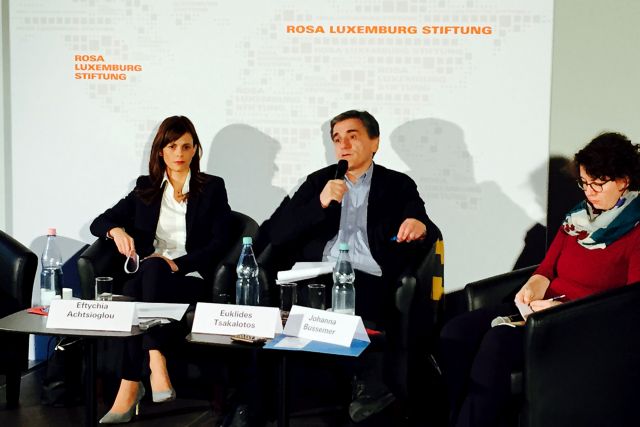 The Ministers of Finance Euclid Tsakalotos and Labor Efi Achtsioglou attended a discussion organized by the Rosa Luxemburg Foundation on whether ending austerity in Europe and Greece can prevent a further turn to the right.

During the debate the Finance Minister expressed his disappointment in Greece’s creditors and appealed for social balance in the reform effort. As he explained, the Greek government has made major progress in the implementation of the current program. Mr. Tsakalotos added that there is a clear plan for the recapitalization of the banks and significant reforms outlined in the summer 2015 agreement have been implemented, such as establishing of an independent tax authority.

According to the Finance Minister the economy is expected to grow for a third consecutive trimester, VAT revenue is on the rise and tax evasion is being tackled. Given that Greece has surpassed its targets the talks on debt relief must soon begin. The Minister argued that there must be a balance between the interests of the country’s creditors and the Greek people, who have made major sacrifices over the past years.

The Finance Minister defended the Greek government’s one-off cash benefit for low-income pensioners and suspension of a VAT hike on Aegean islands affected by the refugee crisis, arguing that given the reform progress that has been achieved, Europe must be more lenient.

Later on the Minister of Labor revealed that the labor market reforms since 2010 have resulted in the collapse of the collective agreements, with only eight remaining in effect. As such, most employees are forced to sign individual contracts that typically include lower wages. Mrs. Achtsioglou stressed that Greece has turned into a country of low wages with a deregulated job market and poverty is on the rise. That is why Greece strongly supports the restoration of collective labor agreements, she further elaborated.