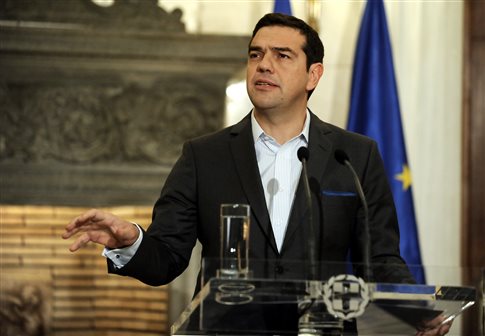 The Prime Minister Alexis Tsipras announced on Thursday evening that 617 million euros will be distributed to 1.6 million low income pensioners, while the scheduled VAT hike on the islands of the north Aegean Sea – which are bearing the brunt of the refugee crisis – will be suspended. As he explained in his statements, these actions were possible thanks to exceeding the primary surplus targets.

“It has been the government’s pledge to redistribute every euro of surplus from available sources to our weaker citizens. Today, staying true to this pledge, we decide the immediate redistribution of the outperformance of 2016 revenues to low-income pensioners” the Prime Minister explained in his televised proclamation via ERT. Pensioners on less than 850 euros will receive the benefit, which will be at least 300 euros.

Regarding the planned VAT hike, the PM stressed that it will be implemented “but though when our fellow citizens are bearing the weight of the whole of Europe due to the refugee crisis. It is time that Europe recognized this”, the PM explained.

Later on in his statement he explained that the Eurogroup decision for short-term debt relief was “extremely important” and the “first step towards returning to the markets and exiting supervision”. He also underlined that his goal is to complete the second review “without any concessions to unreasonable demands”.