Tsakalotos: “Without the review, no solution for debt or QE” 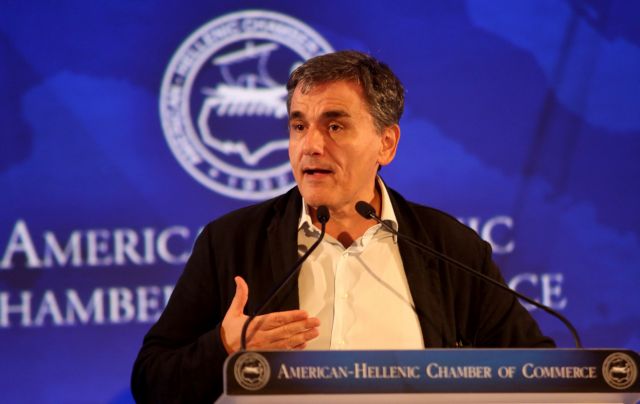 The Minister of Finance Euclid Tsakalotos warned that unless the second bailout review closes, there will be no talks on the debt and Greece will not return to the credit markets, from the stand of the American-Hellenic Chamber of Commerce’s annual conference on the Greek economy. Shortly later, at the political council meeting of SYRIZA, the Minister noted that Greece will not accept further measures simply because the IMF and Europe cannot resolve their differences.

Furthermore Mr. Tsakalotos argued that while the IMF claims that the 3.5% primary surplus is not sustainable, rather than arguing with the major European players for greater debt relief, it is turning against Greece. If the public debt is not a problem, the Minister explained, then lower primary surpluses can be agreed upon. Any “fiscal space” created by tackling tax evasion and illegal trade will be spent on social actions, while that from reducing primary surpluses will be spent on growth. As such, the Minister of Finance proposed to reduce the primary surplus targets after 2018 from 3.5% to 2.5% GDP. This 1%, which amounts to about 1.8 billion euros, could be spent on boosting competitiveness and lower taxes for SMEs.

During his speech the Finance Minister lashed out against Europe, arguing that while a lot has been done in favor of Greece, they have no right to negotiate labor reforms outside of a European framework. He also stressed that December will be highly critical, because if the bailout review does not conclude, there can be no solution for the debt. This in turn means that Greece will not be included in the ECB’s quantitative easing program, which will further delay Greece’s return to the markets.