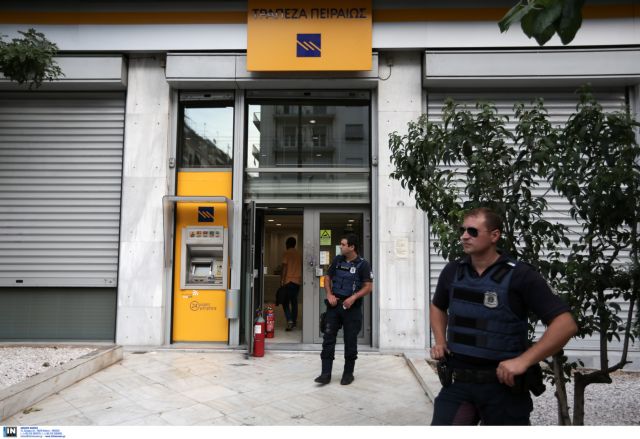 A daring bank robbery took place on Tuesday, with the four bank robbers escaping with about 60,000 euros in cash and having looted 21 bank deposit boxes.

Two of the four masked robbers entered the Piraeus Bank branch in Ambelokipi shortly before closing and brandishing automatic rifles they quickly took the employees and customers hostage. Two more armed robbers then entered the bank and thanks to swift moves, they prevented any employees from contacting the police.

All employees and customers were locked away, aside from the bank managed, who was forced to open the vault, in spite of the time delay mechanism. After patiently waiting for the vault to open, the robber then used drills and other power tools to break into 21 bank deposit boxes, taking everything within. Before they left they doused surfaces in the bank with cleaning fluid in an effort to cover their tracks.

The bank robbery ended shortly before 16:00, lasting about an hour and a half. CCTV footage shows that the robbers were wearing silicone masks, making identification difficult.

Due to the swift moves and equipment used in the robbery, police initially suspected that the robbers may be related to an existing or new militant urban guerilla group. The targeting of bank deposit boxes however and their actions suggests otherwise, with police considering the involvement of criminal groups.