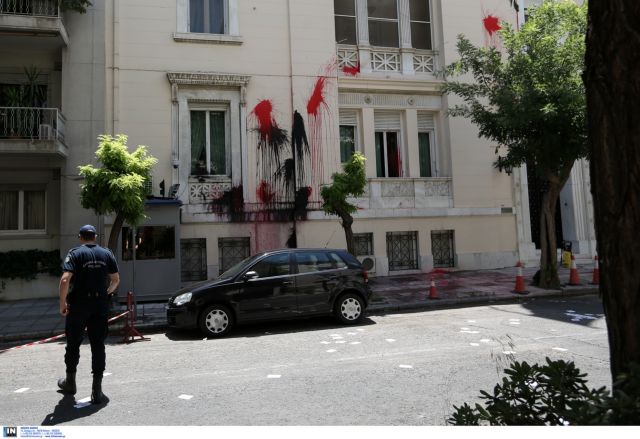 The ‘Rouvikonas’ anarchist group has publicized documents marked “secret – for immediate delivery” from the Ministry of Foreign Affairs to the Police, calling for the arrest of the group members after a demonstration carried outside the Turkish embassy on 26 July.

In their demonstration against oppression in Turkey last week, about 15 members of the anarchist group threw red paint on the embassy building. According to the group about 12 police officers were around the building, but nobody involved was arrested or detained.

The group later claims that the Turkish embassy contacted the Greek Foreign Affairs Ministry and strongly called for the arrest of the group members involved in the protest. In its later the Turkish embassy claims that it is ‘concerned’ that groups as such often use Molotov cocktails in the demonstrations, which could even result in the loss of human lives and extensive damages.

In its statement the Rouvikonas group underlines that the Embassy officials suggested that ‘weapons’ were even used in the protest, after a ‘bulletproof window’ was broken from a bottle of paint that was thrown against the building. Following the complaint filed by the Turkish embassy, one person was arrested for involvement in the protest week.

In relation to comments by Turkish Kerim Uras that the Rouvikonas group supports the ‘antidemocratic coup in Turkey’, the anarchist group responds that it is ‘ridiculous’ and argued that the Embassy is a ‘nest of Turkish MIT agents’, adding that the building ‘does not need just paint but to blow up’.

The Rouvikonas group concluded its statement praising the men and women fighting for the DHKP-C and YPG groups.