Evia: Wildfire burns through thousands of acres of pine trees 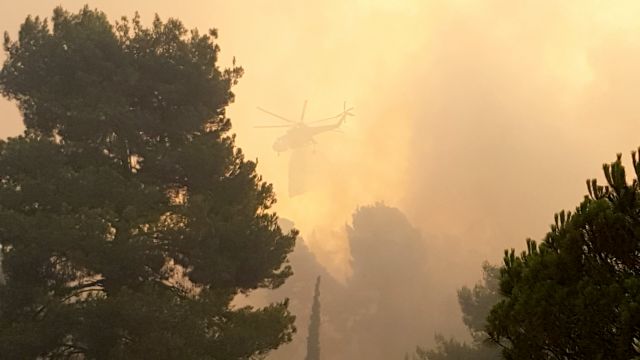 The strong winds on Sunday greatly fueled the fire that broke out in the pine forest of Limni in Evia on Saturday, with the Ministry of Agricultural Development estimating that about 20,000 acres of trees have burned.

With the fire growing stronger and head to the north of Evia, the Fire Brigade has been supporting its firefighters with excavators to construct firewalls. With the nine waterbombers and seven helicopters unable to operate at night, firefighters struggled over night to contain the fire and prevent it from reaching populated areas.

The Minister of Agricultural Development Evangelos Apostolou, who is on site, commented that the fire has caused a major environmental catastrophe, but thankfully there have not been any victims. He also noted that provisions will have to be made to support the local resin producers, who have been greatly affected by the fire.

Meanwhile another major fire that broke out in the municipality of Agios Vasilis in Rethymno, Crete has been set under control in many areas. The fire broke out near Sachtouria and according to local mayor Yannis Tatarakis, it has burned though 20,000 to 30,000 acres of agricultural and farming grasslands.