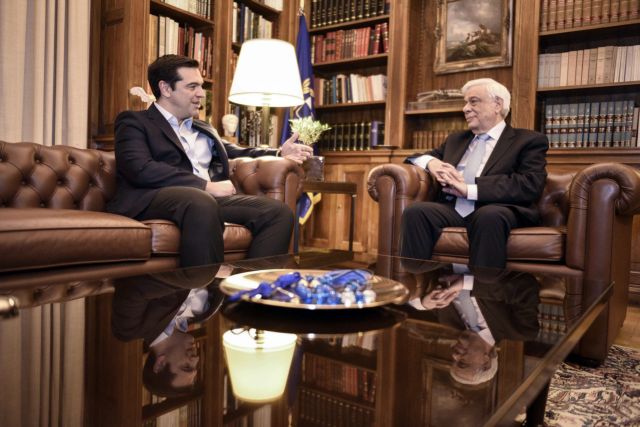 Following the Monday evening Eurogroup, the Prime Minister Alexis Tsipras updated President Prokopis Pavlopoulos and the leaders of the opposition parties on the outcome.

PM Tsipras first contacted the President and informed him that an agreement has been reached regarding the bailout program review and that no measures will have to be taken in advance. He also noted that the further developments will follow the next Eurogroup scheduled for 24 May.

Later on the Prime Minister contacted the leaders of the opposition, starting with main opposition leader Kyriakos Mitsotakis. The New Democracy president reportedly did not take in stand in his talks with the Prime Minister, however party officials estimate that additional measures of 1.6 to 1.8 billion euros may be needed. New Democracy also insists that any debt relief will be carried out after the bailout program concludes in 2018.

After updating his govenment partner and leader of the Independent Greeks Panos Kammenos, the PM contacted the leader of the Democratic Alignment Fofi Gennimata, who in turn responded that she would prefer a meeting of party officials with Finance Minister Euclid Tsakalotos to better discuss the Eurogroup outcome.

The head of the River Stavros Theodorakis commented that based on his talks with PM Tsipras, the agreement on the bailout review has essentially been reached. The Prime Minister also updated the Secretary General of the Communist Party Dimitris Koutsoumpas and the President of the Union of Centrists Vasilis Leventis on the outcome of Monday’s Eurogroup meeting in Brussels.

A government council meeting has been arranged for 1pm on Tuesday, where the Prime Minister will update his cabinet on the details of the Eurogroup meeting.