Eurogroup concludes – Agreement on review and debt talks by 24 May

The Chairman of the Eurogroup Jeroen Dijsselbloem called the Greek government to introduce a contingency mechanism, in order… 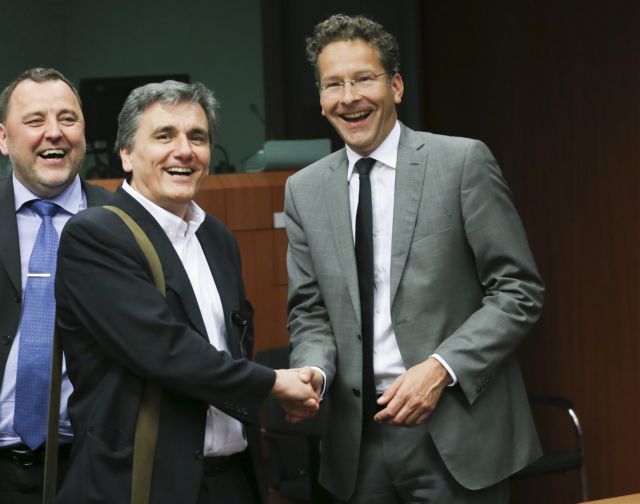 The Chairman of the Eurogroup Jeroen Dijsselbloem called the Greek government to introduce a contingency mechanism, in order to conclude the bailout program review and being three-stage talks on debt relief.

In the press conference that followed Monday’ meeting, European Commissioner Pierre Moscovici and ESM chief Klaus Regling were both optimistic that the 24 May Eurogroup will pave the way for the payment of tranches towards Greece.

The Greek Minister of Finances Euclid Tsakalotos expressed his satisfaction with the outcome of the Eurogroup and that the contingency mechanism will be based on the Greek government proposal. Mr. Tsakalotos also underlined that talks on the Greek debt will also begin and be carried out in three stages.

According to Mr. Tsakalotos the contingency measures will have to be introduced via a Presidential Decree, in order to avoid the legislative concerns previously raised. These cuts, as explained, will be across the board cuts in wages and pensions.

The Eurogroup’s official statement on Greece

The Eurogroup welcomes the completion of a policy package, which should pave the way for a successful completion of the first review of the ESM programme, upon the adoption of the agreed prior actions.

Greece will implement as part of the prior actions for the first review:

The first review includes also the implementation of the NPL strategy, which will contribute to strengthening the balance sheets of banks and enable the return of domestic credit to the Greek economy. As prior actions, measures will be taken to immediately open up the market for the sale and servicing of performing and non-performing loans, with the temporary exclusion of small loans secured by primary residences.

The Eurogroup recalls that a significantly strengthened privatisation programme is a cornerstone of the new ESM programme. In this context, the Eurogroup welcomes the agreement for the forthcoming adoption of the law establishing the agreed Greek Privatisation and Investment Fund, including an initial asset transfer, as part of the prior actions for the first review. The Supervisory Board of the Fund will be appointed by June 2016, and the Fund will become fully operational no later than September.

In line with the statements of the Euro Summit and the Eurogroup in the summer of 2015, the Eurogroup stands ready to consider, if necessary, possible additional debt measures aiming at ensuring that Greece’s refinancing needs are kept at sustainable levels in the long-run. These measures will be conditional upon full implementation of measures agreed in the context of the ESM programme, and will be considered after the completion of the first review, once all prior actions have been fully implemented.

The Eurogroup agrees on the following general guiding principles for the possible additional debt measures: (i) facilitating market access; (ii) smoothening the repayment profile; (iii) incentivising the country’s adjustment process even after the programme ends; and (iv) flexibility to accommodate uncertain GDP growth and interest rate developments in the future.

The Eurogroup also agrees to establish a benchmark for assessing sustainability of the Greek debt, according to which under the baseline scenario of a debt sustainability analysis (DSA), Greece’s gross financing needs should remain on a sustainable path.

The Eurogroup foresees a sequenced approach, whereby a package of debt measures could be phased in progressively, as necessary to meet the agreed benchmark on gross financing needs and subject to the pre-defined conditionality of the ESM programme. The Eurogroup reconfirms that nominal haircuts are excluded, and that all measures taken will be in line with existing EU law and the ESM and EFSF legal frameworks. The Eurogroup will consider:

The Eurogroup mandates the EWG to work further on the technicalities of this package of debt measures and to report back to the next regular Eurogroup on 24 May.

Together with the agreement and implementation of the policy package, this agreement on debt and adequate financing assurances by the European partners are expected to allow the IMF to participate in the programme.