Papandreou: “I did not want the IMF’s involvement, Germany did” 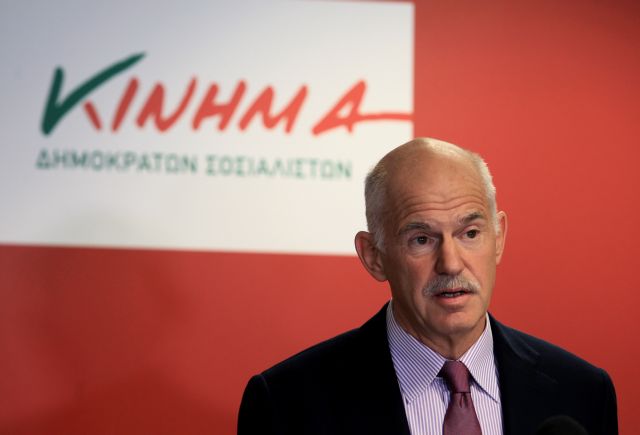 The leader of the Movement of Democrats Socialists and former Prime Minister Giorgos Papandreou claimed that he did not want the involvement of the IMF in the bailout program, which came at the insistence of Germany.

In an interview for SKAI, Mr. Papandreou referred to his tenure as Prime Minister which saw Greece apply for its first bailout program and stressed that he assumed more than his share of responsibilities.

The former PM also noted his greatest mistake was not carrying out a referendum, which he attributed to his successor at the helm of PASOK Evangelos Venizelos and a small group of MPs.

According to Mr. Papandreou, during his trip to Cannes he informed German Chancellor Angela Merkel, European Commission head José Manuel Barroso, the President of the European Council Herman Van Rompuy, Eurogroup chief Jean-Claude Juncker and the office of French President Nicolas Sarkozy on the possibility of a referendum.

This referendum, he explained, would take place after the negotiations on the bailout program were agreed. The former PM claimed that they responded with understanding, with the exception of Mr. Sarkozy who was concerned about the market response.

In reference to his infamous statement that “there is money”, he claimed that his words were taken out of context and added that he was not talking about handouts. Rather, he explained, he referred to the benefits of tackling tax evasion, bolstering transparency in the public sector, merging organizations and limiting bureaucracy to attract foreign investments.

During his interview the former Prime Minister referred to his predecessor Kostas Karamanlis “who knew things that he did not tell us” and accused him of “statistical fraud” and a cover-up by withholding the real divs on the economy. Mr. Papandreou also accused the governor of the Bank of Greece at the time Giorgos Provopoulos of withholding an IMF report that warned the debt may soar to 800% of the GDP.

Mr. Papandreou later on revealed that in 2010 he contacted New Democracy leader Antonis Samaras and asked for his support to pass the bailout agreement through Parliament, who ultimately rejected the request. The two spoke again in June 2011, with Mr. Papandreou offering to form a coalition government to overcome, even without him as Prime Minister.

However the New Democracy president interpreted the offer as a desire to resign and as an opportunity to call elections, Mr. Papandreou explained. The former PASOK leader added that if Mr. Samaras truly wanted to work together he would have arranged to meet and discuss, rather than creating further tension by leaking the offer to the press.

Finally, when asked about SYRIZA, Mr. Papandreou noted that the party took advantage of the Greek people’s frustration to general unrealistic expectations and hopes. As such, he estimated that SYRIZA missed an opportunity to turn into left wing democratic party, rather than the leftist clientelist party or one that views itself as a regime. Mr. Papandreou concluded by repeating his call for greater debate among parties from all sides of the political spectrum in order to overcome the crisis with least burden on the Greek people.