Thousands take to the streets on Thursday to protest austerity

The nationwide strike called on Thursday by GSEE, ADEDY and PAME saw thousands protest and demonstrate against the… 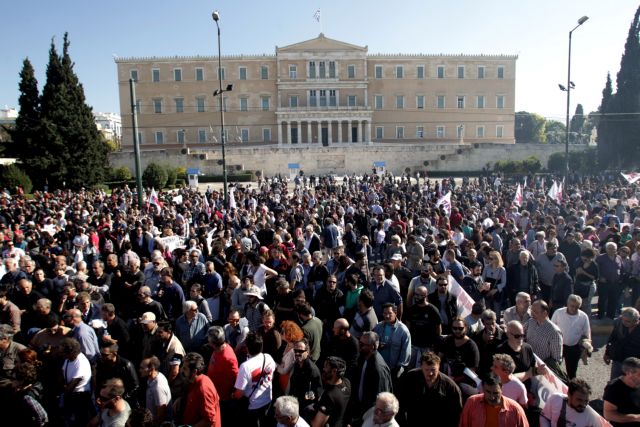 The nationwide strike called on Thursday by GSEE, ADEDY and PAME saw thousands protest and demonstrate against the govenrment’s austerity policies in Athens, Thessaloniki, Patra and other major cities across the country.

Over 6,000 demonstrators are estimated to have gathered in Syntagma square in Athens, blocking off traffic in many streets. A block of about 5,000 protesters from the Popular Union and extraparliamentary left parties were joined by anarchists and gathered outside the National Archeological Museum.

The president of the Democratic Left Thanasis Theoharopoulos attended the GSEE-ADEDY rally and underlined that his party will be on the side of society and commented that a “serious, responsible and organized opposition” is necessary, while stressing the need for an immediate plan for productive reconstruction and job creation.

In Thessaloniki the gatherings planned by GSEE-ADEDY, PAME and extraparliamentary left-aligned unions are estimated to have attracted about 10,000 people. In Patra there was some tension between SYRIZA and the Popular Union, over whose banner would lead the march. Ultimately SYRIZA was at the front of the march, which concluded shortly after 12:30.

Shortly after 1pm a number of anarchists clashed with the police near the Archeological Museum. The riot police responded with tear gas and flash bangs, while anarchists set up barricades, burned cars and smashed store fronts on Kolokotroni Square.