PM Alexis Tsipras: “I call the Eurogroup to reverse its decision”

The Prime Minister Alexis Tsipras made a new statement on Sunday evening, calling the Eurogroup to reverse its decision, while… 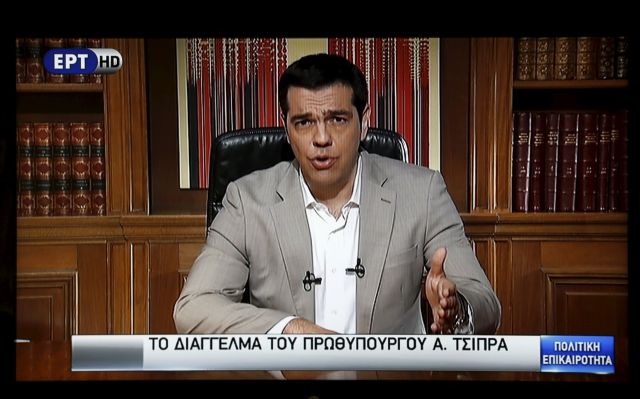 The Prime Minister Alexis Tsipras made a new statement on Sunday evening, calling the Eurogroup to reverse its decision, while announcing the imposition of capital controls.

Yesterday’s Eurogroup decision to not approve the Greek government’s request for a few days’ extension of the program to give the Greek people a chance to decide by referendum on the institutions’ ultimatum constitutes an unprecedented challenge to European affairs, an action that seeks to bar the right of a sovereign people to exercise their democratic prerogative.

A high and sacred right: the expression of opinion.

The Eurogroup’s decision prompted the ECB to not increase liquidity to Greek banks, and forced the Bank of Greece to recommend that banks remain closed, as well as restrictive measures on withdrawals.

It is clear that the objective of the Eurogroup’s and ECB’s decisions is to attempt to blackmail the will of the Greek people and to hinder democratic processes, namely holding the referendum.

They will not succeed.

These decisions will only serve to bring about the very opposite result.

They will further strengthen the resolve of the Greek people to reject the unacceptable memorandum proposals and the institutions’ ultimatums.

One thing remains certain: the refusal of an extension of a few short days, and the attempt to cancel a purely democratic process is an insult and a great disgrace to Europe’s democratic traditions.

I am awaiting their immediate response to this fundamentally democratic request.

They are the only ones who immediately can–even tonight–reverse the Eurogroup’s decision and enable the ECB to restore liquidity to the banks.

What is needed in the coming days is composure and patience. The bank deposits in the Greek banks are entirely secure.

This holds true for the payment of wages and pensions, as well. We will deal with any difficulties with calmness and determination.

The more calmly we confront difficulties, the sooner we will overcome them and the milder their consequences will be.

Today, we have the chance to prove to ourselves–and indeed, to the world–that justice can prevail.

Once again, we have a historic opportunity to send a message of hope and dignity to Europe and the world.

In these critical hours, as we face history together, we must remember that the only thing to fear is fear itself.

We will not allow it to overcome us.

The dignity of the Greek people in the face of blackmail and injustice will send a message of hope and pride to all of Europe.