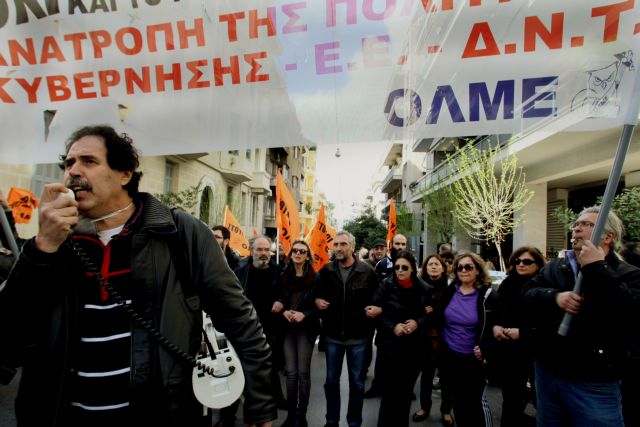 ADEDY’s main demonstration will take place at 11am at Klafthmonos Square in down-town Athens, where thousands of employees from the public sector are expected to attend. ADEDY’s executive committee has also called a 48-hour strike for the 19th and 20th of March.

The public sector union has cited the planned assault on worker rights that are currently being “negotiated” between the troika and the coalition government and include limitations on strikes, wage freezes and cuts, amongst others. ADEDY has stressed that the proposed measures are “brazen and provocative” and “colonial demands”.

Bondholders protesting outside the State Council over unfair haircut

A demonstration is being held outside the main building of the Council State in down town Athens today, by small bondholders who suffered a haircut to their investments two years ago.

The bondholders are demonstrating over the haircut because, as they argue, they were tricked by the government which had promised to find a solution to their problem.

The vice president of the bondholder union Yannis Tsolias commented that “Samaras promised the immediate restitution of bondholders. We have at least 150,000 votes. We are expecting the Prime Minister to fulfill his election campaign promise. We demand a solution now, before elections”.