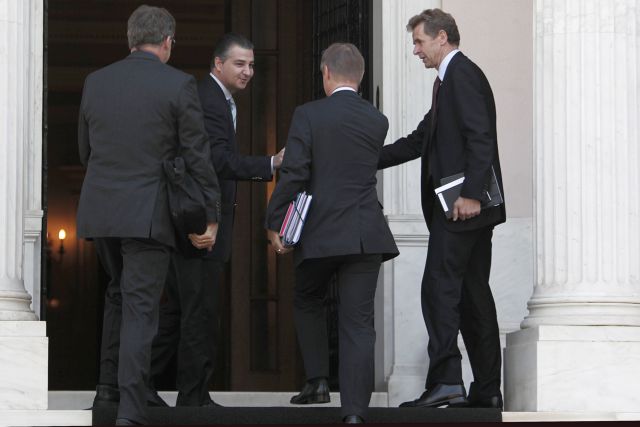 The troika representatives are giving the government until the end of October to settle its affairs and prepare everything that is necessary so that it can collect the 1-billion-euro loan installment. In order to do so, the government must figure out how it will cover the budget gap of 2014 and the 1.5 billion missing from the insurance funds.

Oli Rehn’s spokesman Simon O’ Connor commented that a lot of work is necessary in order to fulfill the prior actions to collect the 1 billion euros loan installment from July and was not in the position to determine when the troika representatives would return to Athens.

On Monday the government will submit its draft of the budget for discussion in Parliament. The president of the Financial Experts Council Panos Tsakloglou will represent Greece at the IMF’s annual meeting, with the governor of the Bank of Greece Provopoulos also being in Washington.

The difficult Eurogroup and post-election Germany

The Minister of Finances Yannis Stournaras will have a first opportunity to discern the post-election intentions of Germany at the upcoming Eurogroup on the 14th of October. Unless there are dramatic developments Wolfgang Schäuble is expected to be “new” Minister of Finances. Any critical decisions regarding Greece will be made after the formation of a government in Germany.

During the recent negotiations with the troika, an agreement was reached on achieving a 100-million-euro primary surplus in 2013, with the government arguing that it will not impose a 2‰ levy on business turnovers for freelancer insurance fund OAEE nor any further pension cuts in the armed forces. The biggest problem appears to be the 1.5 billion euros necessary to cover the insurance fund deficits of 2014.

The government is intending to veto any further measures, by posing financial and political arguments such as achieving the greatest primary surplus in Europe from reforms and the huge social cost from five years of recession and an accumulated 25% drop in GDP since 2008. Senior officers consider the troika demands to impose new measures based on the insurance fund deficits that have suffered from the unprecedented unemployment rate to be “paradoxical”.