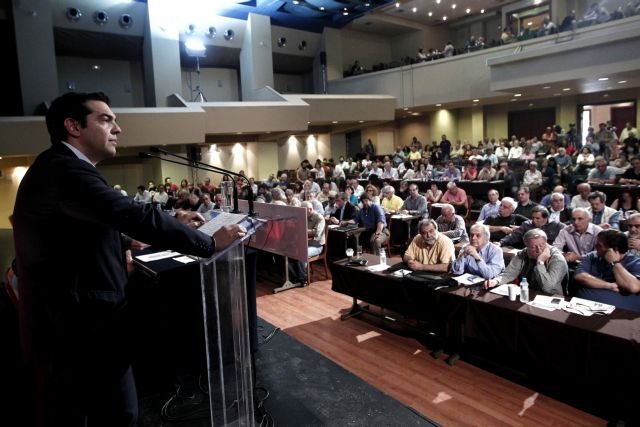 The purpose of SYRIZA’s Central Committee convention which took place this weekend is to prepare for the upcoming summer “founding convention”, which will address a number of internal operations.

The two prevailing divs in SYRIZA are party president Alexis Tsipras and the head of the “Left Platform” Panagiotis Lafazanis. Party president Alexis Tsipras has been accused of adopting a more hegemonic perspective in the party, by asking the smaller parties comprising the SYRIZA coalition be “absorbed”, with SYRIZA becoming a more “traditional” party.

Mr. Lafazanis accused Mr. Tsipras of attempting to silence opposition voices within the party and insisted that the SYRIZA maintains its coalition nature by preserving the integrity of the smaller parties. Despite predictions of an all-out war between the two sides, none of the two seemed to be willing to create a major upheaval.

In his speech Mr. Tsipras defended the pluralism of opinion within SYRIZA, but spoke of the need for a more streamlined and simpler party structure, in order to create a unified front based “on the synthesis of opinion and not conflicting partisan deals”.

The secretary of SYRIZA’s parliamentary group Nikos Voutsis wondered “what is the point of the Convention if we remain the same” and attacked Mr. Lafazanis’ Left Platform for being unable to provide any practical solutions. Mr. Voutsis noted that the convention will be very difficult if the two opposing sides within SYRIZA do not cooperate.

Mr. Lafazanis defended the right of the smaller parties maintaining their independence within SYRIZA and accused the party’s leadership for “discovering an internal enemy in order to cover up its loss of momentum”, while stressing that SYRIZA should not become “hegemonic or monolithic” like the other parties. Mr. Lafazanis explained that the party must regain its confrontational nature in order to come out of the “black out” and regain the trust of the electoral body.

On Sunday SYRIZA MP Manolis Glezos, who did not attend the convention, was scathing in his criticism of Mr. Tsipras’ intentions, which he considered to be a “blow to democracy and the pluralism of opinion”. Mr. Glezos disagreed with the imposition of a single list in the election of party institutions and dissolution of smaller parties. Mr. Glezos later clarified that his intention was not to divide, but to initiate an exchange of opinion.