Mr. Mitsotakis has a duty to tell the whole truth about the raging EYP surveillance scandal and to allow the judiciary, unhindered, to conduct an in-depth investigation. 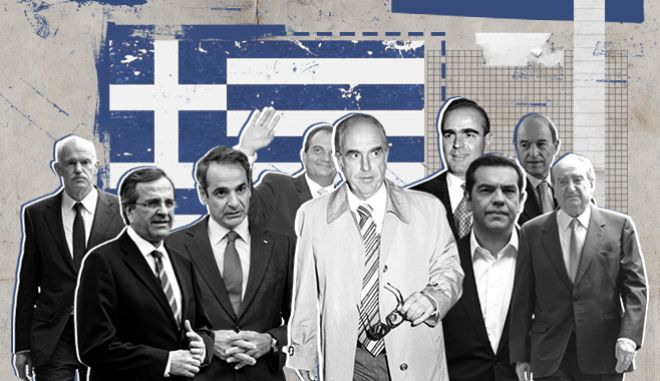 Fatalists, not entirely unjustifiably, might invoke the hapless fate that constantly pursues us.

Every time Greece tries to take a breath and stand on its feet, something happens and it loses its way.

It is as if is being chased by an ancient Sisyphean curse, condemned perpetually to struggle, burdened, to climb a mountain, and just as it is approaching the pinnacle, to plunge back to the ground, wounded, only to commence the same attempt from scratch.

In the country’s post-regime change history (after the collapse of the 1967-1974 military junta), there were innumerable such instances of backpedaling that battered the Greek people.

In 1985, the country made a choice that was decisive for its future. Threatened by the twin deficit in public finances and the balance of payments, it decided to attempt to adjust to the EU model and norms.

At that time, the prime minister, Andreas Papandreou, implemented an ambitious three-year plan of economic stabilisation and structural reforms.

At the end of that programme, the entire demanding effort was literally betrayed by domestic realities.

The first was the usual pre-electoral priority of handouts, and the second was the revelation of the huge Koskotas scandal, which highlighted power plays that derailed the country from its path.

By 1989, in a span of just two years, all of the people’s sacrifices had been squanderd, and the country again faced the prospect of bankruptcy.

Then, in 1990, when the country was able to achieve a certain balance and then PM Konstantinos Mitsotakis managed to put Greece on a European course once again, the effort collapsed under the weight of the tensions and scandals that arose during his administration.

Toward the end of 1993, Greece once again found itself at the edge of the abyss.

The by then aged Andreas Papandreou returned to power and eschewed his previous populism, declaring that, “Either the nation will eradicate its debt or the debt will obliterate the nation.”

Everyone exhibited discipline and the country once again decisively continued on its European path.

The government was successfully in achieving its European targets, but it was wounded by the political environment created by the arms procurements, construction, and stock market scandals.

After Greece’s admission to the eurozone, citizens’ trust in the government collapsed, and after New Year’s, 2002, it became immobilised, betrayed by arrogant and greedy forces within the party.

PM Kostas Karamanlis, who succeeded him, although he was prepared and had the support of the Greek people to pursue reforms and changes that would ensure the country’s future, in the end retreated from his plan, fearing a clash with populist forces, and he, too, admitted the forces of greed into the party.

The structured bonds scandal severely wounded the PM, and so when the international financial crisis broke out in 2008, he simply froze and abandoned the struggle, essentially handing over power to George Papandreou – who was unprepared and at a loss regarding how to deal with the imminent financial crisis – in the 2009 snap general election.

The governments that ruled during the great economic crisis lacked the forces and the popular support needed in order to endure a host of weighty burdens.

Left-wing SYRIZA leader Alexis Tsipras, who managed to muster political momentum and the tolerance of the public, at first found himself drowning in a cycle of self-deception and delusions that bedevilled him and his party, and then he lost his way through his scandalous power plays and ambitions.

Kyriakos Mitsotakis, who succeeded him, came across as a person with convictions and capabilities.

During three years of major successive crises, he managed to salvage the economy and restore Greece’s international reputation.

Just as he seemed to be at the top of the world, he was betrayed by his conspiracy-minded entourage, by his closest associates, who, as he maintains, acted arbitrarily and succumbed to unpardonable mistakes, placing in doubts the country’s efforts to return to normalcy, and destroying his own myth, which he assiduously crafted over the last three years – that of a trustworthy liberal leader

We reached the point of seeing the revival of the problematical political networks of Panos Kammenos [who as leader of the Independent Greeks party was Tsipras’ coalition partner] and of SYRIZA.

The truth be told, the sequence of historical events does not demonstrate bad fate, but rather institutional deficiencies, and the small or large betrayals that they permit.

Mr. Mitsotakis has a duty to tell the whole truth about the raging [EYP National Intelligence Agency] surveillance scandal.

He has a duty– however wounded and betrayed he may be – allow the judiciary, unhindered, to conduct an in-depth investigation of EYP’s actions, and he must firmly insist that our democracy, at any cost, be institutionally bolstered and safeguarded.