Sakellaropoulou: Greece has accepted the jurisdiction of the ICJ, Turkey has not

“In 2015, my country renewed its recognition [of the Court’s jurisdiction with a statement, adding certain particular exemptions, in line with the example of European and other states,” Sakellaropoulou said. 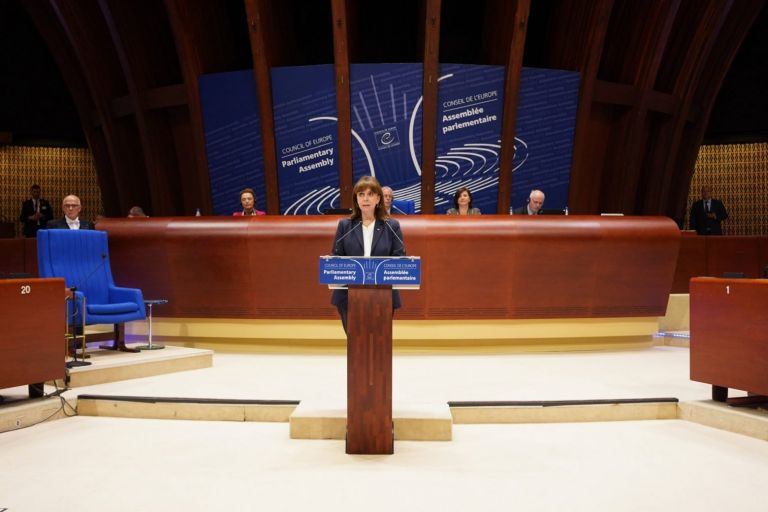 Speaking before the Parliamentary Assembly of the Council of Europe, President Katerina Sakellaropoulou today defended Greece’s provisos in its 2015 renewed acceptance of the jurisdiction of the International Court of Justice at The Hague (ICJ), underlining that Turkey has until now steadfastly refused to accept the Court’s jurisdiction.

The Greek president was responding to the criticism of Turkish MP Ziya Altunyaldiz, who represents the Konya electoral district, that Greece’s calls to refer Greek-Turkish disputes to the ICJ are not in earnest, as Athens has exempted particular issues on which Turkey challenges Greek sovereign rights from the Court’s jurisdictions, just as many other countries also have submitted their own exemptions.

“As tension is evolving right now in the Eastern Mediterranean, Greece says that it will go to the International Court of Justice. However, in 2015, Greece renewed certain reservations [exemptions] that touch on the jurisprudence of the ICJ regarding demilitarisation [of Greek Eastern Aegean islands in this case], the extent of national airspace, the delimitation of territorial waters, the Exclusive Economic Zones, and the continental shelf. Hence, do you believe that it is possible to go to the ICJ when Greece still maintains these reservations? Do you not think that this is particularly contradictory?” the Turkish MP asked.

It is unclear whether the Turkish MP’s publicly raising the terms of a joint Greek-Turkish submission of questions to the ICJ may signal that Ankara is mulling the prospect.

Countries must agree on questions they submit to the ICJ

For two countries to refer disputes to the ICJ, they must first agree on the specific questions that they will pose to the court in a joint document called a compromis.

Turkey has a long wish list of issues that would limit Greek sovereignty or leave it exposed in terms of its defences, including those on GreeceEastern Aegean islands, the very Greek sovereignty over which Turkey is now challenging.

Greece accepts only delimitation of the two countries’ continental shelf and their Exclusive Economic Zones, maritime areas that countries can exclusively exploit economically.

Sakellaropoulou underlined that Turkey has never recognised the jurisdiction of the Court and that Greece’s exemptions are perfectly legal and not uncommon.

“Greece has recognised the mandatory jurisdiction of the International Court of Justice at the Hague, in accordance with Article 36 of its Statute, since 1994,” the president said.

“In 2015, my country renewed its recognition [of the Court’s jurisdiction with a statement, adding certain particular exemptions, in line with the example of European and other states,” Sakellaropoulou said.

On the contrary, Turkey as we know has not recognised the jurisdiction of the Court.”