Vilia – The fire is out of control 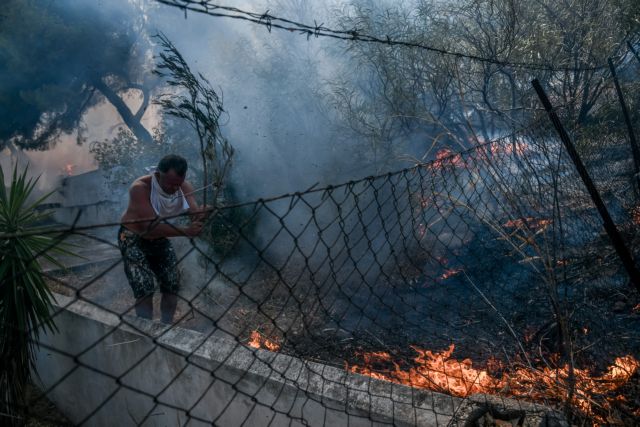 The fiery front is over 10 kilometers long, destroying everything in its path. The fire in Keratea is in decline.

The situation because of the big fire in the area of ​​Vilia is dramatic. At night five more settlements were evacuated (Thea, Panorama, Paleochori, Paleokoundoura and Agia Sotira) and the nursing home “Panagia Faneromeni”, as the flames that spread on a large front approached residential areas burning dense and inaccessible virgin pine forest on Mount Patera.

In contrast, the fire is in recession in the municipality of Lavreotiki, where there are only scattered outbreaks within the perimeter.

With the first light of day, the air means started to operate, especially in Vilia, and in particular 6 helicopters and 5 aircraft, including the Russian Beriev-200. As far as the ground forces are concerned, 330 firefighters are operating, including eight (8) groups of on foot, 115 vehicles, the METPE (Motorized Special Operations Department), as well as the forces provided by the European Mechanism and Special Protection Policy. Poland is participating with 143 firefighters with 46 vehicles. The OLYMPUS Mobile Operational Center has been provided to assist in the coordination of forces.

In addition, the Defkalia Plan was activated and the Greek Army has as assistance 5 groups of infantry units. Assistance is also provided by many volunteer firefighters, construction equipment of the Greek Army as well as water tankers of the Region and the Local Government. The fire brigade is coordinated by the head of the Fire Brigade, Lieutenant General Stefanos Kolokouris.

In the fire of Keratea that broke out yesterday in low vegetation, in the Markati area and has burned houses and forest, there are scattered active fires inside the perimeter where 104 firefighters are operating including three groups on foot, 40 vehicles. 2 helicopters have been mobilized for firefighting. Volunteer firefighters, construction machinery and water-carrying local authority vehicles provide assistance.

Without the air means, the fiery front that is burning in a ravine will not be confronted, said earlier the deputy governor of Attica, Vassilis Kokkalis.

“The situation is very difficult. The front is out of control. “An order has been given for the evacuation of three settlements and the evacuation of a nursing home in Agios Georgios”, said Mr. Kokkalis, to MEGA channel.

“The legal framework with the forest authorities must change. If studies are to be done and the fire zones must be huge”, stressed Mr. Kokkalis.

The Deputy Regional Minister of Civil Protection pointed out that the fires in Keratea and Vilia are the result of arson.

“It will be seen whether it is an arson or not. The fires fell together and are forested areas. “All this is not accidental, for sure,” he concluded.

One of the fronts has a direction towards Megara and another one towards Porto Germeno.

“People obey orders. Last night on the road that connects Vilia with Porto Germeno, the volunteers really fought hard. More than 150 people with chainsaws made a belt, which cut all the pines, and stayed there to save their area”, said Mr. Kosmopoulos. “Everything that happened was done by volunteers, firefighters and tankers of the Municipality.”

The governor of Attica, George Patoulis, spoke of a great ecological disaster.

“It was a fiery front all night. Fortunately, at the level of settlements we fortunately did not have a particular problem. The fire is directed towards the plains of Megara. “Fortunately, the winds are not strong and we expect the aerial means to assist in the early morning hours”, said Mr. Patoulis speaking to Sky, earlier. He noted that during the night there were continuous fires in the places where there was a fire.

“A great battle was fought by the Fire Brigade and volunteers as well as vehicles of the Region. The battle will continue for the next few hours. ”

Mr. Patoulis spoke of a “great ecological disaster for the dense forest located on Mount Patera and the wider area.”

The fire in Keratea is in decline

Meanwhile, the fire is in recession in the municipality of Lavreotiki, where there are only scattered outbreaks within the perimeter.