Austrian Federal Minister for European and International Affairs Alexander Schallenberg nounced that Austria will offer one million euros to the UNHCR representation in Greece and more staff to stem the flows either bilaterally or through Frontex. 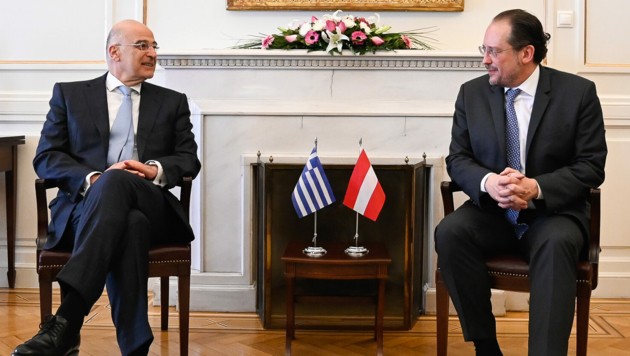 The Austrian Federal Minister for European and International Affairs Alexander Schallenberg in a clear show of support for Greece’s efforts to stem a large wave of migration into the EU has announced that Austria will offer one million euros to the UNHCR representation in Greece and is prepared to offer more staff to stem the flows either bilaterally or through Frontex, which is about to develop am emergency rapid action force in Greece.

The Austrian pledge came at a joint press conference in Athens after talks between Foreign Minister Nikos Dendias and Schallenberg and the issue will be further discussed at a 6 March foreign ministers’ meeting in Zagreb, as Croatia holds the EU’s rotating co-presidency. The meeting will focus on developments in Idlib, Syria, which have dramatic repercussions on flows of refugees to Europe.

For his part Dendias underlined that EU declarations of solidarity can no longer remain a dead letter and that every single member-state must shoulder its share of the burden in dealing with the emerging refugee-migrant crisis.

“Right now, Greece is defending the borders of Europe. Obviously, not from the thousands of unfortunate people who have fallen victim to organized and absolutely condemnable manipulation, but from an unprecedented, cynical decision of the Turkish leadership to use these people as a human battering ram to exert diplomatic pressure on Europe with the use of minors on the frontline,” Dendias said.

Turkey reneges on 2016 joint statement with EU on migrants

“Despite the continuous assurances of my Turkish counterpart that Turkey is honouring its commitments deriving from the Joint Statement of 2016, Ankara is brazenly violating this agreement, not only proclaiming that the borders are open, but also helping thousands of unsuspecting people to travel to our land or sea borders. Consequently, the mix of this aggressive instrumentalization of these people’s misfortune has been staged by a specific director,” the Greek foreign minister said alluding to Tayyip Erdogan.

“This is an asymmetrical threat to Europe. A threat that has been organized and strengthened, in word and deed, by the Turkish side, through tactics such as the fabrication and dissemination of fake news and the urging of migrants, by the Turkish authorities, to move towards the Greek and European borders.