‘I saw many children I was worried would die because they were suffering malnutrition. I met a baby who smelled bad; his mother had not washed him for weeks because there was only cold water and she was worried he would die,’ volunteer doctor Hana Popisilova said. 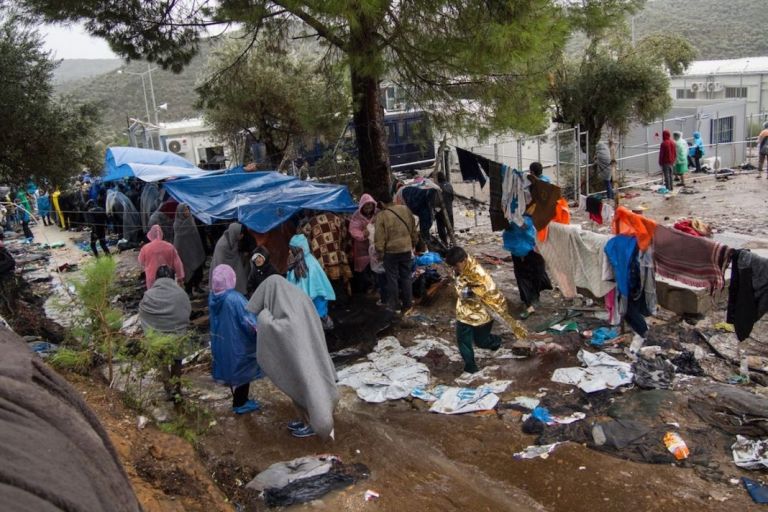 As ruling New Democracy and main opposition SYRIZA cross swords over the government’s plans to requisition fields to create closed refugee and migrant reception centres, the UNHCR has called for the evacuation of refugee and migrant families and ailing people from the Moria camp on the island of Lesvos.

The international press has persistently reported on the horrid living conditions in the Moria camp, which has been fraught with violence and squalor.

However,  there is also an immediate threat of a public health crisis as volunteer doctor Hana Pospisilova told The Guardian.

“I am an experienced doctor, I have seen many patients in my life, but what I saw there had me crying. I saw many children I was worried would die because they were suffering malnutrition. I met a baby who smelled bad; his mother had not washed him for weeks because there was only cold water and she was worried he would die,” Popisilova said.

“There are children, between 12 and 15, living in the olive grove and they are barefoot. A lot of them have scabies and we can’t treat it because they have to wash. But they say to wash means waiting three hours and it’s risky: people have knives, and you can only have two minutes in the shower after you wait, I tell them they need to discard their clothes and they say ‘I have only these clothes.’ They have had them on for seven months. I saw everyday 20 people and all 20 had a horror story,” she told The Guardian.

“People come and go to the medical facilities, they take antibiotics, but they are still coughing, they still have a temperature. If you read about Spanish flu it was exactly like this that it began to spread, in overcrowded facilities where people had a viral infection that became a bacterial infection that killed them.

The UNHCR is also critical of the New Democracy’s government’s decision to deprive refugees and migrants of the AMKA state insurance fund number (offered to them by the previous SYRIZA government).

“UNHCR has been appealing to the Greek government to use emergency measures to expedite its plans to transfer a greater number of asylum-seekers to appropriate accommodation on the mainland.  More than 36,000 asylum seekers are now staying in reception centres across five islands which were originally designed for 5,400 people.” said Mahecic.

“Greece has been generous and compassionate towards refugees, despite a very complex and difficult situation, and the East Aegean islands have taken on a vastly disproportionate burden and responsibility. It is critical that other regions in Greece step up their solidarity to help alleviate pressures by receiving transferred asylum seekers and opening up reception places. Continued European resources, capacity and solidarity are also needed to boost Greece’s response,” he underlined.

Residents of the Aegean islands of Lesvos, Chios, Kos, and Leros are up in arms because the government has broken its electoral promises to transfer most of the refugees and migrants to centres on the mainland.

That effort has come up against the vehement opposition of mayors around the country (the vast majority of whom were elected with the backing of New Democracy) and local societies.

Having raised the bar excessively in promising to resolve the refugee-migrant crisis with much tougher and more effective measures than SYRIZA, it is now oriented toward building more closed reception (detention) centres on the very islands that have for years borne the brunt of the crisis.

The government says that refugees and migrants who have no criminal record and are not new arrivals whose asylum applications have not been processed will be allowed to exit the centre with a pass in the morning or afternoon but must be back by dusk when the facility will be closed.

There will also be policing or monitoring inside the camps but the government has not completely clarified how it proposes to do that.

The decision not to allow new arrivals to leave the wire-fenced centres at all was reportedly designed by the government to deter new refugees and migrants from making the passage to Greece.

Government requisitions Lesvos fields in a show of resolve

In a bid to demonstrate its resolve in dealing with the crisis, the government has requisitioned large tracts of non-arable fields for three years and with compensation to the owners in order to build new closed centres.

It is possible that the open and closed migrant centres may operate simultaneously during a transitional period.

In any case it will take at least six months from the beginning of works for the centres to be completed and although the target date is spring many say it will take until September and October.