‘It is imperative that the international law of the sea, the principle of good neighbourly relations and the sovereignty and sovereign rights over the maritime zones of all neighbouring coastal states, including those generated by their islands, need to be respected,’Josep Borrell stated on behalf of the Commission. 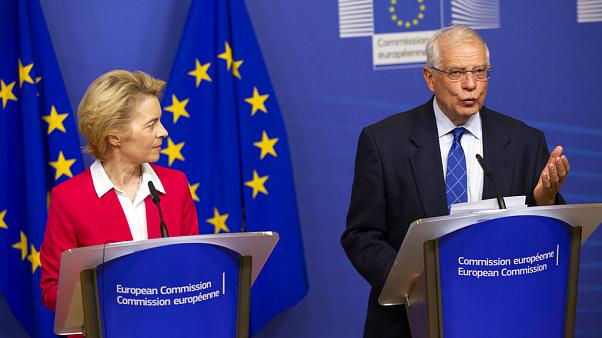 Turkey has announce plans to begin gas and oil exploration in a maritime area reaching from the Greek island of Kastelorizo to Libya, with which Ankara has in November, 2019, signed an accord that delimits their putative Exclusive Economic Zones (EEZs, though they are not contiguous) by expropriating a huge chunk of Greece’s EEZ, particularly around Crete.

Turkish President Recep Tayyip Erdogan’s spokesman, Ibrahim Kalin, has said that Turkey plans to commence exploration and drilling in the maritime area described in the Turkish-Libyan inter-state agreement, which includes a broad area southeast of Crete.

“Due to our agreement with the official government of Libya we will continue seismic exploration and drilling in the Eastern Mediterranean and in the areas we have delimited with Libya. I must stress that we are determined on this issue,” Kalin stated.

Under the terms of the 1982 UN Law of the Sea Convention that area clearly is clearly part of Greece’s EEZ as it is within 200 miles from the coast of the island of Crete.

In direct violation of the UN Convention Ankara has steadfastly maintained that islands have no EEZ, a position that was rejected by the US, France, and the entire EU among others.

Turkey is not a signatory to the 1982 Convention.

The Turkish Presidency’s announcement coincided with a scathing denunciation of the Turkey-Libya memorandum from the EU’s foreign policy chief, Josep Borrell, who on behalf of the European Commission was responding to a parliamentary question submitted by Greek MEP Stelios Kimbouropoulos (New Democracy).

“On 12 December 2019, the European Council adopted conclusions stating that the Turkey-Libya Memorandum of Understanding on the delimitation of maritime jurisdictions in the Mediterranean Sea infringes upon the sovereign rights of third States, does not comply with the law of the sea and cannot produce any legal consequences for third States. The European Council also reconfirmed the European Union’s position on Turkey’s illegal drilling activities in Cyprus’ Exclusive Economic Zone and unequivocally reaffirmed its solidarity with Greece and Cyprus,” Borrell replied.

“It is imperative that the international law of the sea, the principle of good neighbourly relations and the sovereignty and sovereign rights over the maritime zones of all neighbouring coastal states, including those generated by their islands, need to be respected. All members of the international community must abide by these principles and should refrain from any actions undermining regional stability and security.”

“The Council continues to expect Turkey to unequivocally commit to good neighbourly relations, international agreements and to the peaceful settlement of disputes, having recourse, if necessary, to the International Court of Justice. Turkey must avoid threats and actions that damage good neighbourly relations and respect the sovereignty of all EU Member States over their territorial sea and airspace as well as all their sovereign rights, including inter alia the right to explore and exploit natural resources, in accordance with EU and international law, including the United Nations Convention on the Law of the Sea.”

Cyprus solicits US protection from Turkey

Meanwhile, Cypriot Foreign Minister Nikos Christodoulides in talks with visiting US Assistant Secretary of State Francis Fannon requested that Washington offer substantial assistance to the Republic of Cyprus in fending off Turkey’s multiple violations of Cyprus’ sovereignty in contravention of international law.

Christodoulides stressed at the meeting with Fannon that Turkey’s actions in the Eastern Mediterranean and the Middle East also harm US interests, the Cyprus News Agency reported.