Member of Rouvikonas faces felony charge for vandalism of Parliament

Main opposition New Democracy (among other parties) has long maintained that there are links between SYRIZA and anarchist groups. 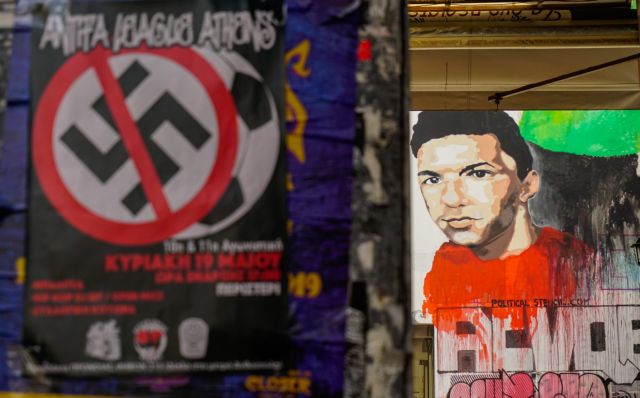 The sole member of Rouvikonas who was arrested after the anarchist group vandalised the Parliament’s facade yesterday faces felony charges, as do the others of the group of approximately 30 who comfortably fled the scene and are at large.

The 36-year-old has been charged with causing damage to an historic monument.

The PM’s office and opposition parties condemned the attack.

The investigating magistrate is responsible for coordinating efforts to track down the other culprits and commence criminal proceedings.

Meanwhile, this afternoon another incident occurred at the Parliament building when a 70-year-old man started walking up the steps beside the Tomb of the Unknown Soldier to reach the courtyard.

He was immediately stopped by police and was taken to the local police precinct where he was questioned and released.

Political cover for ‘our kids’?

This morning scaffolding was set up outside of Parliament and a team of workers began painting over the red paint splashed by Rouvikonas yesterday. The group had also thrown two smoke bombs.

The Greek Police Union has in the past said that policeman have orders from the Citizen’s Protection Ministry not to arrest members of the anarchist group, whom the government views as social activists.

Some also say that the existing legal framework prevents them from taking more forceful action to make arrests.

Greek Police are aware of the identity of a number of members, including a leading div who has a Facebook account and writes on an anarchist website.

Tea and sympathy from Dragasakis

Main opposition New Democracy (among other parties) has long maintained that there are links between SYRIZA and anarchist groups, and even accused terrorists whose trials they have attended.

The ruling party has steadfastly and vehemently denied both allegations, asserting that this is not the way of the left-wing.

Deputy Prime Minister Yannis Dragasakis in December, 2017, prevented security from ushering out a group of about 20 anarchists that had interrupted a party gathering at which he was the speaker declaring that, “These are our kids too.”

The group was protesting in support of convicted terrorists Nikos Maziotis and his partner Paula Roupa, who were conducting a hunger strike in prison at the time.

In a tweet at that time Dragasakis wrote, “The Left does not fear someone or something. It has its positions and can hold its own in every battle on positions.”