SYRIZA’s policies are no different from those of centre-left European parties, which in turn are quite similar to centre-right parties. 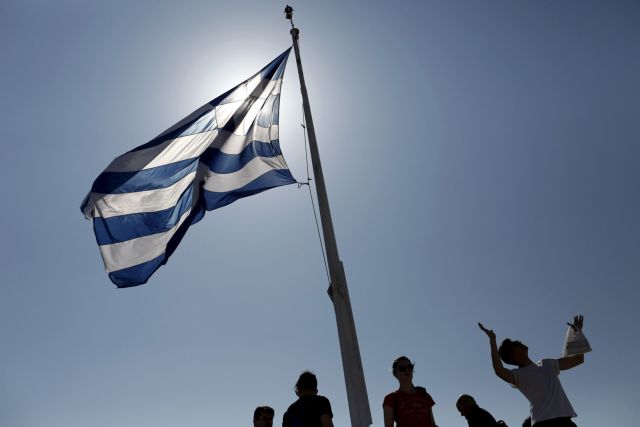 Tourists stand under a Greek national flag atop the Acropolis hill in Athens, June 14, 2015. Greek Prime Minister Alexis Tsipras said he was willing to accept unpalatable compromises to secure a deal with international creditors provided he gets debt relief in return, something that Germany refuses to countenance. REUTERS/Kostas Tsironis
Share

That involves not only the reality of a one-party, SYRIZA government (after the Independent Greeks pulled out), but also the conscious choice of both SYRIZA and New Democracy to set up a duel between two gladiators in the arena.

The political playing field in the context of this two-party dominance is shifting to the right as regards what is being contested, the tenor of the rhetoric, and the political proposals propounded by the two parties.

The SYRIZA communications machine is trying to create the impression that there has been a rupture with the government’s former junior coalition partner and that this has extricated it from the heretofore necessary alliance with a right-wing party and has allowed it to move back to the left.

The narrative is that getting rid of right-wing Kammenos happily coincides with the greater room SYRIZA will have to implement left-wing policies, such as a hike in the minimum wage, social benefits, and the effort to restore collective bargaining contracts. It says that future growth will allow it to expand distributive justice policies.

A bid to absorb the centre-left

SYRIZA is no longer trying to fashion an ad hoc alliance in order to confront the dread bailout memorandums.

It now wants to forge a broad, democratic and progressive front that can accommodate most of the political spectrum – from conservatives and social democrats to the radical left.

Move it to the right

In fact, SYRIZA has moved to the right. It is a party that does not dispute privatisation and will not hinder it.

Indeed, it is battling to transfer as many public assets as possible to the Hellenic Republic Asset Development Fund (HRADF, known in Greece as the “super-fund”) to be exploited. That includes even archaeological sites and monuments.

The party in no way disputes the architecture of the eurozone and accepts the need for fiscal discipline. It fully accepts the deepening of European unification and a greater restriction of whatever remnants of national sovereignty are left.

It is a party that in speaking of economic growth in no way disputes the markets but instead focuses on entrepreneurship and attracting investment.

It is a party that implemented the greatest insurance system reform of the last decades.

It is a party that fully accepts the country’s Atlanticist orientation and is fully aligned with Nato policies.

Any way one looks at it, this is a right-wing policy which is a far cry from traditional left-wing positions.

SYRIZA’s policies are no different from those of centre-left European parties, which in turn are quite similar to centre-right parties.

One must not forget that a policy of benefits designed to avert extreme exclusion or incentives to bolster social entrepreneurship could easily be accepted by the neo-liberal camp as well.