The group is responsible for about 30 arson attacks on anarchist hangouts, on sit-ins at other venues, and on other buildings. 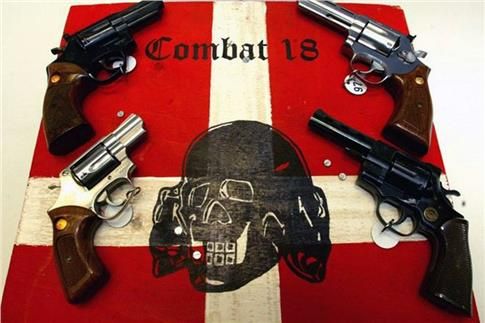 Following raids in the early morning hours today, Greek Police remanded in custody six individuals and appear to have rooted out a neo-Nazi group of storm troopers known as Combat 18.

The first neo-Nazi group by that name began in the UK in 1992, and then spread to other countries.

The two raids occurred in Attica and Ioannina. Of the six individuals arrested, four or five are expected to face charges.

The group goes by the name “Combat 18” which derives from Adolf Hitler’s initials, which are the first and eighth letters of the Latin alphabet.

The group is responsible for about 30 arson attacks on anarchist hangouts, on sit-ins at other venues, and on other buildings.

The investigation conducted by the counter-terrorism squad, which led to the apparent rooting out of the group, lasted for months. It was based on wiretaps and surveillance.

Among those arrested are a 30-year-old lawyer, and a 23-year old at whose home flares, flammable materials, and small quantities of explosives were found.

A young man of ethnic Greek descent from one of the republics of the former Soviet Union was also arrested, though no further details were given.

The Greek branch of the group appears to have been launched five years ago, along with another group called Uncommited Nationalist Meanders. That group has been linked to an extreme right-winger who left Golden Dawn and was accused of involvement in a vicious 1998 attack on a university student who was nearly killed.

Combat 18 had in the past assumed responsibility for attacks on anarchist gathering places of the groups “Strouga” and “Distomo”, in the Nea Philadelphia and Agios Panteleimon neighbourhoods.

The group has not, however been linked to the recent attack against the Free Social Centre Favela, in Piraeus, in which a lawyer was injured.