Over the past days, Zaev has made a string of statements that reject some of Athens’ basic negotiating positions, and then he immediately praises the Greek government’s political will to achieve a solution. 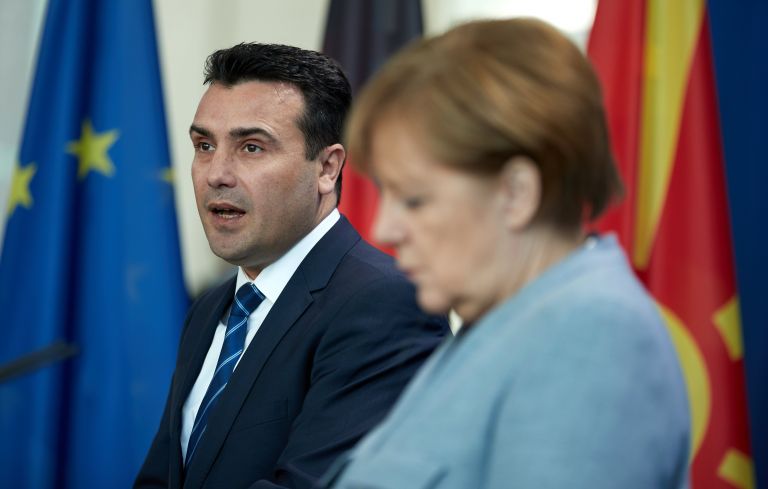 In the last in a series of hardline statements, Zoran Zaev, the prime minister of the Former Republic of Macedonia, said in an interview that there is no need to revise his country’s constitution, as Athens demands, in order to removed irredentist references.

“There is no need for a revision. The Constitution is a book of internal rules. It has no repercussions outside the country,” Zaev said, reiterating that his country has no irredentist claims against Greece.

That directly dismisses Greece’s position that any name agreed to in a settlement must apply under all circumstances and must be used by all parties, including domestically in FYROM.

Over the past days, Zaev has made a string of statements that reject some of Athens’ basic negotiating positions, and then he immediately praises the Greek government’s political will to achieve a solution.

“There is truly a friendly atmosphere and I believe in the Greek government’s dedication. I hope that on the Greek side the government and the opposition can focus on a solution, as is the case in our country,” Zaev said.

Dual name, one domestic and one international

Essentially, Zaev is expressing Skopje’s longstanding insistence on a dual name, one for domestic use and one for international use. It is not entirely clear if Skopje is prepared to use the international name in its bilateral relations, but it seems that it has not been ruled out.

“Any agreement will be for international use and will be a guarantee for both sides, as it will have the highest possible guarantee, from the United Nations,” Zaev said.

He rejected any constitutional amendment on the grounds that any future government could change it back anyway.
“We amended our constitution in 1993, due to the sentiments of our Greek friends. All the steps we have taken so far are in the direction of eradicating irredentism. Surely, Greek citizens know that we have no territorial claims, or anything like that,” he asserted.

As for Greece’s demand that the new name apply erga omnes, or for everyone, he said that this “means use by the rest of the world”. “We are prepared to discuss this implementation, because we know it is very important for the Greek side,” Zaev said.

‘No issue of identity’

Zaev said there could not be any discussion of the “Macedonian identity” and ethnicity.

“There is a paragraph about nationality, which is to say about the relations of state and citizenry, without involving national sentiment,” he said.

Zaev suggested that there is more common ground with Athens on what the language of the majority in his country will be called – 30 percent are Albanians – hinting that there could be a qualifier added to the word Macedonian.
“The name issue is the essence of the problem. The problem exists for the past 25 years. We must find a solution that will distinguish the Greek province from our country,” Zaev said.

“This is the art of diplomacy, and it should not be discussed in news conferences, but rather behind closed doors. I believe that public statements can do more harm than good to the process,” Merkel had said.